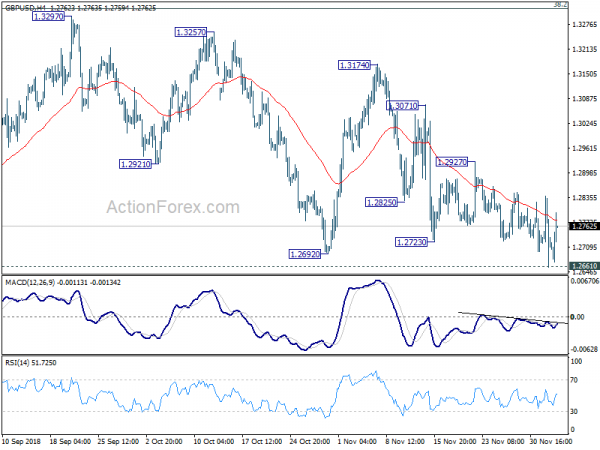 Sterling stages a broad based rebound today despite poor PMI services data. The Pound is partly helped by technical support from GBP/USD (at 1.2661) and EUR/GBP (at 0.8939). Additionally, traders are probably reassessing Brexit scenarios. A tricky point is on what would Common’s rejection of Prime Minister Theresa May’s Brexit deal lead to. One far fetched possibility is UK unilaterally withdrawing Brexit request. The ongoing Brexit debate in the parliament, and speculations ahead of December 11 vote might limit downside of the Pound for the moment.

Meanwhile, Euro follows as the second strongest on positive development in Italy. While nothing concrete has been delivered, it seems that Italy is working “intensely” with European Commission to revise its 2019 budget plan. Words from the coalition government are so far affirmative. German-Italian spread drops to around 280, suggesting acceptance by investors. Australian Dollar is currently the worst performing one after weak GDP data. Yen is the second weakest as there is no intensification in risk aversion.

Technically, most pairs are bounded in rather narrow range without any significant development. EUR/USD is staying in 1.1267/1472. GBP/USD recovers after hitting 1.2661 but upside is limited well below 1.2927 minor resistance. USD/CHF fails 1.0006 resistance again but it’s holding above 0.9908. USD/CAD is also holding in range of 1.3160/3359 despite strong rebound.

Focus will turn to BoC rate decision. And the central bank is widely expected to keep interest rate unchanged at 1.75%.

UK PMI services dropped notably to 50.4, down from 52.2 and missed expectation of 52.5. That’s also the lowest reading in 28 months. Markit noted there is only marginal expansion of overall business activity. Employment growth moderates to four-month low. And, business optimism is weakest since July 2016.

Chris Williamson, Chief Business Economist at IHS Markit, noted in the release that “a sharp deterioration in service sector growth leaves the economy flatlining in November as Brexit concerns intensified”. And, the PMI surveys are consistent with merely 0.1% GDP growth in Q3, “thanks to the expansion seen back in October”. And he warned that “growth momentum has since been lost and risks are clearly tilted to the downside.”

Eurozone PMI composite finalized at lowest since Sep 2016, Germany the center of slowdown

Among the countries, Germany PMI composite dropped to 52.3, hitting 47 month low. Markit noted that “It was in Germany where the euro area’s growth slowdown was centred, with latest data showing the weakest expansion here in nearly four years.”

Italian Prime Minister Giuseppe Conte was quoted by la Repubblica daily that “if I have the chance to reduce the economic impact of some measures I’m here.” He added, “I’m the one who is entitled to speak with the European Commission … and I never halted discussions. Right now if I can recover some funds, tweak the final figure, change a few little things, it doesn’t mean I’m backtracking.”

European Budget Commissioner Guenther Oettinger repeated the urge for Italy to comply with EU rules. He said in a German radio interview that “We hope that a draft will come today that corresponds to the criteria for all euro countries”. But he sounded tough and indicated that even bring down deficit target from the current plan’s 2.4% to 2.2% of GDP, that “would be against all the commitments”.

BoJ Wakatabe: Inflation only halfway to target, may revert to deflation

BoJ Deputy Governor  Masazumi Wakatabe said today that the first characteristic of the current economy is it’s being “widespread”. And it’s “bring about benefits to a wide range of economic entities.” And, the second characteristic is that “inflation rate turning positive”, “which is different from the case in the mid-2000s”.

On outlook, he reiterated the bank’s rhetorics that the economy is expected to continue on an “expanding trend”. But he also noted various risks including US-China trade friction. On prices, he said CPI is likely to “increase gradually” as the economic expansion continues.

Though, Wakatabe also warned that for now, inflation remained at around 1%, “only halfway” to 2% target. And, “in a case where downward pressure is exerted on the economy again, it may revert to deflation. Thus, it’s appropriate to continue with the “large-scale monetary easing”.