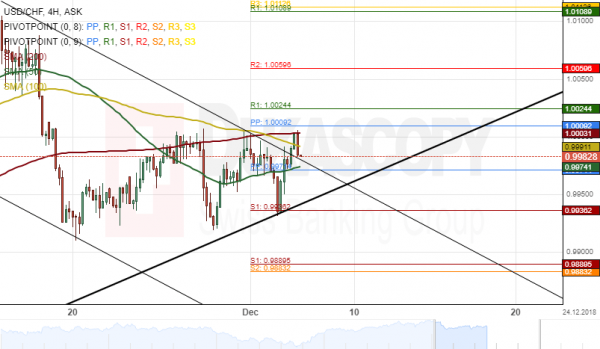 The bearish momentum which has been dominating the USD/CHF currency pair since the middle of November has guided the US Dollar toward the lower boundary of a long-term ascending channel pattern at 0.9889.

The exchange rate was stranded between SMAs during the first part of Wednesday’s trading session. The 50-hour simple moving average was providing support for the pair at 09973, while the 200-hour SMA was providing resistance for the rate at 1.0003.

Given that a breakout had occurred through the upper boundary of a one-month descending channel, it is likely that the currency exchange rate will continue to gain strength within this session and potentially target a resistance level formed by the weekly R1 at 1.0024.