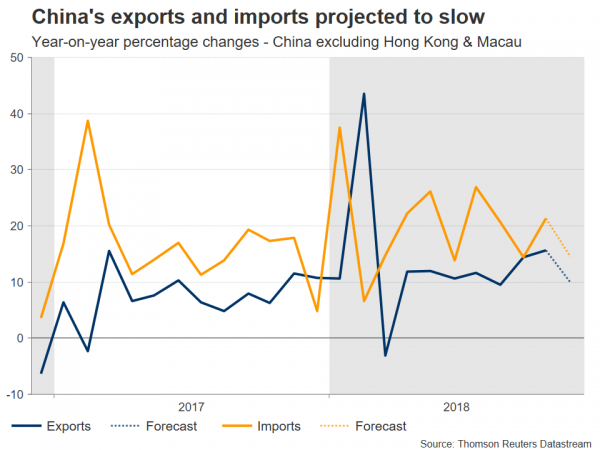 Over the weekend, China will release its trade and inflation data for November. Forecasts point to a slowdown in both exports and imports, as well as in inflationary pressures. Such figures could amplify speculation that trade-related uncertainty is starting to weigh on the world’s second largest economy and potentially hurt the yuan, as well as the aussie, which is considered a liquid proxy for “China plays”.

China’s exports are anticipated to have grown by 10.0% on a yearly basis in November, slower relative to the 15.6% recorded in October, whereas imports are expected to have risen by 14.5%, compared to the previous 21.4%. Accordingly, the dollar-denominated trade surplus is seen practically unchanged at $34.0 billion. Note that the trade balance has come back under the spotlight lately, considering that President Trump looks closely at the bilateral deficit between the two nations, and oftentimes quotes it as a metric of China “winning” on trade.

In terms of price pressures, the PPI rate is forecast to have dipped to 2.7% in yearly terms during November, from 3.3% previously. Similarly, the CPI rate gauging consumer prices is predicted to have ticked down to 2.4%, from the prior 2.5%.

Although the “trade war” has been put on hold after the agreement between Presidents Trump and Xi to refrain from imposing more tariffs for 90 days, such figures would still suggest that the negative effects of this dispute may be starting to show up. Note that Chinese authorities have already announced plans – both on the monetary and fiscal fronts – to cushion the economy from the tariffs and the associated uncertainty. That said, such a set of data (or worse yet an even more disappointing one), could fuel speculation for a further easing of policy, potentially hurting the yuan as well as the aussie.

Considering the close trading relationship between the Chinese and Australian economies, the aussie is typically viewed as a liquid proxy for China-related plays. Given its sensitivity to developments in the Chinese economy, it tends to be favored by speculators as shorting the yuan itself for example runs the risk of being caught on the wrong side of daily policy intervention by Chinese authorities.

Looking at aussie/dollar technically, immediate support to declines may be found near the November 21 low of 0.7200. Even lower, the November 13 trough of 0.7160 would attract attention.

On the flipside, a stronger-than-anticipated set of data may help aussie/dollar recover. Resistance to advances could come near the inside swing low on November 30 at 0.7280, before the November 29 peak of 0.7345 comes into view.

In the big picture, the recent “trade truce” is a welcome sign, as it suggests there’s willingness on both sides for a deal. That said, all that was agreed was to continue talking, which although encouraging, may not ultimately mean much. What’s most important, is seeing whether China compromises on the burning issues: forced technology transfer and intellectual property protection. Until – and if – there are such signs, an eventual re-escalation of the dispute still seems like the most likely outcome.