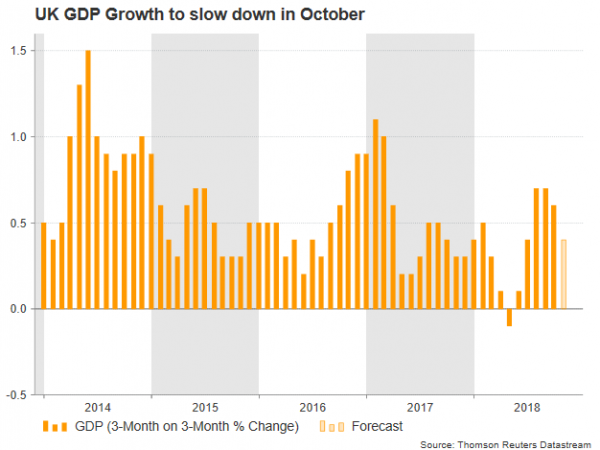 Next week should be a busy one for the British pound as a crucial vote in Parliament will likely open a new era for the Brexit story and  May’s future as a leader. Key data releases such as GDP growth and employment readings are scheduled for delivery as well, but investors will probably be too obsessed with the Brexit story to react to the numbers.

While Theresa May is pushing hard to persuade lawmakers that the deal agreed with the EU is the best possible outcome reached after 20 months of negotiations, the economic picture is not as favourable as the UK wishes to have before leaving the bloc in March. Monday’s GDP growth data for the month of October are likely to confirm that; analysts predict an expansion of 0.4% in the August-October period compared to the previous three-month average of 0.6%.

Recent Markit PMI figures could be an early indication that the British economy has slowed down further. Particularly the services sector, which accounts for 80% of the economy, had another weak turn, with the Services PMI dropping to seven-month lows in October before falling more steeply in November to just above the 50 neutral mark, the level that separates expansion from contraction. Meanwhile, the manufacturing industry is also facing strong headwinds as businesses seem to be highly hesitant to invest in new projects given the uncertainty around Brexit, driving the relevant PMI to the lowest since August 2016 in October. On Monday, the office for National Statistics is projected to say that the manufacturing output grew by 0.1% m/m in October, slightly less than September’s 0.2% but enough to add evidence that the supply side is not in good shape to support the economy.

On the demand front, discouraging retail sales stats show that consumers are spending cautiously despite enjoying the highest wage growth since financial crisis. While analysts estimate that the employment report for the month of October will be no different from the previous release, with average earnings excluding bonuses forecast to grow at a steady pace of 3.2% y/y and the unemployment rate projected flat at 4.1% – the lowest in more than four decades – pessimism among households is spreading. The signals are that consumers will not be able to provide a helpful hand to boost growth. Subsequently, if household spending remains downbeat, inflation might keep losing steam in coming months, apparently forcing the Bank of England to delay any rate hikes.

But since the UK’s future performance both in economic and political terms depends on how the Brexit will occur, the pound is not expected to react much on next week’s data this time. A rejection of the withdrawal bill in the Parliament on Tuesday followed by headlines that lawmakers are set for a no-confidence vote against May could heavily weigh in FX and stock markets. On the other hand, in the less popular scenario where the plan gets an approval, investors could increase buying positioning. Note that the EU has already warned that there is no other option in offer than the one agreed with British PM, with the European Council President, Donald Tusk, saying during the G20 summit that a refusal could either cancel Brexit or bring a departure with no deal.

Technically, traders could see pound/dollar returning immediately to 1.2700 next week if Brexit news disappoint. Below that, the pair could continue losing until it reaches the 1.2657 bottom, where any decisive break lower could find a barrier somewhere between 1.2580 and 1.2350.