USD/CHF Tumbles on Softer US Jobs and Wage Data 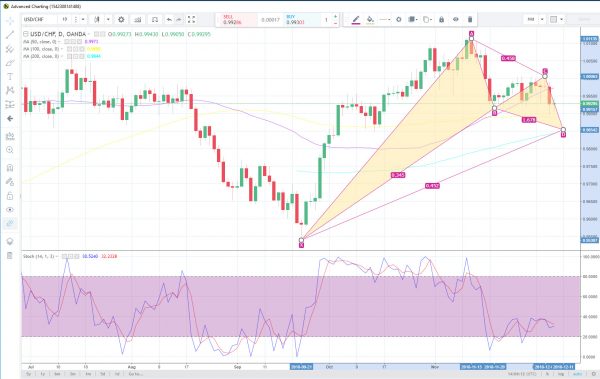 A wrath of US economic data painted the picture that US economy is slowing, propping up expectations that Fed will dial back their rate hike expectations at the December 19th meeting. The headline nonfarm payroll printed 155,000 jobs, a miss from the 200,000 level that analysts’ eyed. The unemployment rate stayed steady at 3.7%, matching the lowest level since 1969. The wage data came in softer than expectations and the back month was revised lower, thus provided a little relief for inflation concerns. The November monthly average hourly earnings miss by one-tenth of percentage point at 0.2%, while the annual reading came in line with expectations at 3.1%

Price action on the USD/CHF was initially lower after the softer than expected US economic data. The initial selloff approached the lows of the week but since has rebounded to little changed on the session. Key resistance remains the 0.9970 to parity region. If we see a resumption of the downward move that has been in place since the middle of November, price could initially target 0.9888. Major resistance would come from 0.9842, which is both where the 200-day SMA trades and where we could see the beginning of a bullish Gartley pattern. If the bullish reversal is valid we could see price a move back towards the parity level.