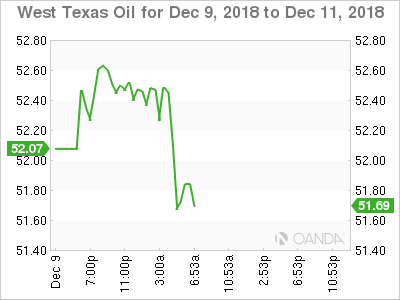 Monday December 10: Five things the markets are talking about

Dampening investor sentiment was weak data on China’s slowing economy and news the China had summoned the U.S and Canadian ambassadors to protest the arrest of Huawei CFO. The euro remains better bid on pullbacks and the dollar trades mixed while U.S Treasuries and European sovereign bonds are little changed.

Note: Data on the weekend showed that China’s trade balance slowed as impact of trade tensions starts to show; CPI rose to +2.2% vs. +2.4%e in November while PPI came inline.

Because of the holiday-shortened month, flash PMI’s for December will be released this week. The European Central Bank (ECB) meets Thursday, while tomorrow is the big day in the U.K — Parliament votes on Prime Minister Theresa May’s Brexit plan, which is not expected to pass.

Note: PM May is deciding whether to risk a defeat or to postpone the vote.

Data in Europe this morning showed that investor morale in the eurozone slumped to a four-year low in December as fears about trade conflicts, Italy’s budget row with the E.U and Brexit led to a collapse in sentiment.

Elsewhere, oil prices are steady after Friday’s rally triggered by OPEC and its allies agreeing on production cuts.

On tap: The U.K Parliament will vote on the E.U divorce deal tomorrow. The ECB is set to cap asset purchases at its final policy meeting this year on Thursday, while China industrial production, retail sales data for November is due Friday.

In Japan, stocks tumbled to a six-week low overnight as a deeper-than-expected domestic economic contraction in Q3 and a sharp sell-off last week stateside-depressed investor sentiment. Sino-U.S. trade tensions continue to hurt global stocks and push the Nikkei down -2.1% – the lowest closing level since Oct. 29. The broader Topix fell -1.9%.

Note: Japan’s benchmark index has lost -13.2% from its three decade high in early October. Data overnight showed that Q3 GDP fell -2.5% in the final release compared to the preliminary reading of -1.2%. The downward revision was driven by a drop in private capital expenditures.

Down-under, Aussie shares closed atop of their two-year lows overnight as investors turned risk-averse on concerns over Sino-U.S trade tensions and slowing global growth, with the healthcare and financial indexes recording the biggest losses. The S&P/ASX 200 index closed down -2.3%. In S. Korea, the Kospi closed down -1.06%, pressured by shares of Samsung Electronics which fell -1.8%, hitting its lowest close in 19-months.

In China, stocks ended lower overnight as disappointing November trade and inflation data added to concerns over slowing growth, and as the arrest of the Huawei CFO increased investor worries that the Sino-U.S trade war could escalate. At the close, the Shanghai Composite index was down -0.8%, while the blue-chip CSI300 index was down -1.2%.

In Hong Kong, shares ended lower for a fourth consecutive session on Monday, at the close, the Hang Seng index was down -1.2%, while the China Enterprises index lost -0.9%.

In Europe, regional bourses trade lower across the board, tracking weaker U.S markets on Friday and lower futures this morning as geopolitical tensions continue to weigh.

Brent crude futures have rallied overnight after OPEC+ agreed last week to a supply cut from January. Despite this, the price outlook for next year remains weaker on the back of an economic slowdown.

Prices rallied after OPEC+ (including Russia) on Friday said they would cut oil supply by -1.2M bpd, with an -800K bpd reduction planned by OPEC members and -400K bpd by countries not affiliated with the group.

Also providing a bid to Brent this morning is the shutdown of the +315K bpd El Sharara oilfield in Libya.

Note: Oil prices have fallen sharply since in the last two months on signs of an economic slowdown, with Brent losing almost -30% in value.

Ahead of the U.S open, gold prices are holding steady atop of their five-month high overnight, supported by Friday’s disappointing U.S jobs report that fuelled speculation that the Fed may stop raising interest rates sooner than expected. Spot gold is at +$1,247.80 per ounce, after hitting its highest since July at +$1,250.55 overnight. U.S gold futures are up +0.2% at +$1,254.6 per ounce.

French government bond yields have rallied this morning, pushing the gap over safer German Bunds to its widest in seven-months following more violent anti-government protests in France over the weekend.

The French 10-year bond yield has rallied around +2 bps to +0.71%, a one-week high and almost +7 bps above the five-month lows hit last week.

The gap between 10-year bond yields in France and Germany stood at around +46 bps, its widest since late May when a rout in Italian bonds flowed over into other eurozone bond markets except Germany.

French bonds also underperformed other eurozone peers – the Spanish/French 10-year bond yield gap was at its tightest since October as French yields rose.

Elsewhere, the yield on 10-year Treasuries has climbed +1 bps to +2.85%, the biggest increase in two-weeks. In Germany, the 10-year Bund yield