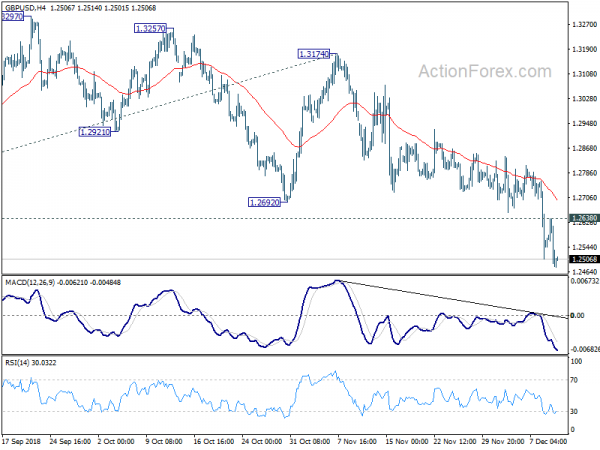 New Zealand and Australian Dollar are trading as the strongest ones today so far, following rebound in Asian stocks. Nevertheless, both currencies are generally limited below last week’s highs, indicating unconvincing upside momentum for now. Indeed, sentiments did turn more positive on US-China trade talks. But there are enough risks for investors to worry about. An imminent one is UK Prime Minister Theresa May’s political downward spiral and whether she’d be ousted very soon. For today, Yen is the weakest one, followed by Dollar.

Technically, AUD/USD is still struggling in very tight range around 0.7199 support. It’s more likely to head downwards on breakout, then upwards. GBP/USD’s decline extends in Asia today but EUR/GBP and GBP/JPY are held in tight range. More time is needed to digest this week’s selloff in Pound. A focus for today is whether EUR/USD and EUR/JPY would finally have a downside breakout in recently established range. 1.1267 in EUR/USD and 127.49 in EUR/JPY are the levels to watch.

In a Reuters interview, Trump toned down his rhetorics against Fed chair Jerome Powell and said he’s a “great guy”. Though, Trump still disagree to Fed’s “foolish” rate hike next week.

Trump may intervene in Huawei case for trade deal

On trade negotiation with China, Trump said the Chines are “back in the market” buying “tremendous amounts of soybeans”. He added there maybe another meeting of “top people on both sides”. And, if necessary, Trump is open to another meeting with Xi “who I like a lot and get along with very well”.

Separately, Huawei’s top executive Meng Wanzhou, arrested by Canada on December 1 on US request, was granted bail by a Canadian court yesterday.

UK PM May’s EU tour ended with nothing, to face leadership challenge ahead

Pressures have been mounting on UK Prime Minister Theresa May after she called off the Brexit parliamentary vote. Her meeting with European leaders appeared to be fruitless. After the meeting with May, European Council president Donald Tusk tweeted that “Clear that EU27 wants to help. The question is how.”

Domestically, the campaign to oust May seems to be gathering momentum. BBC cited multiple sources saying that the required 48 letters to 1922 Committee chair Graham Brady for leadership challenge have been reached. And, the vote on May’s leadership could happen at the first opportunity, that is, as soon as tonight in the UK.

Former UK Prime Minister John Major urged the current government to revoke Brexit notice to the EU now. He said, “We need to revoke article 50 with immediate effect. The clock, for the moment, must be stopped.”

He added, “It’s clear we now need the most precious commodity of all: time. Time for serious and profound reflection by both parliament and people. There will be a way through the present morass, there always is.”

Also, he said Brexit will weaken UK’s position in the world. He argued that “We are a more valued ally for America because of our influence in Europe and we are more valued by Europe because of our close relationship with America.” And, “Britain, shorn of both these long-standing allies, will be seen by the world as a mid-sized, middle-ranking power that is no longer super-powered by her alliances.”