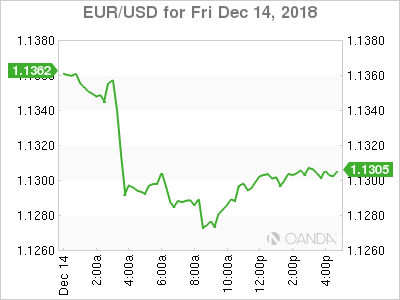 Safe-haven currencies soared on Friday as disappointing data from China and Europe heightened concerns over global growth. The greenback finished the week stronger against its major trading partners as investor eagerly await Wednesday’s FOMC interest rate decision and updated economic projections. The majority of economists expect the benchmark federal-funds rate to be raised by 25 basis points. Most will focus on any downgrades we see on the economic projections and clarity if the risks on housing and the global economy are starting to weigh on their outlook. The recent wave of global headwinds led many analysts to downgrade their outlook on Fed tightening for 2019, with some calling for only one or two rate rises. At the September meeting the Fed forecasted three rate increases in 2019, they will now be able to downgrade that assessment or have a wait and see approach.

The EUR/USD fell 0.50 percent on Friday as risk aversion returned as softer data from China and the euro zone escalated concerns that economic and political risks could grow in the coming weeks. For China, industrial output was at the slowest pace since early 2016 and the retail sales reading had its worst result since 2003. The PMI readings for the euro zone, Germany, and France all came under consensus, with the focus falling France’s manufacturing and service sectors falling into contraction.

The euro whipsawed following the ECB rate decision. The statement was fairly hawkish as the asset purchase program was confirmed to end and the guidance for the first rate hike remained at least through the summer of 2019. Draghi’s presser however was more dovish as he highlighted the risks to the euro zone’s economic growth outlook remained “broadly balanced” but were shifting to the “downside,” due to geopolitical uncertainties, the threat of protectionism, emerging-market. The staff forecasts however cut both GDP and CPI for 2019.

Continued softer economic data from the euro zone is likely to push back expectations for that first rate hike. The Italian budget pledge also may not be enough and we could see that story remain in play next week. Next week’s key data will be the German Ifo Business Climate on Tuesday morning.

China has maintained their stance that monetary policy will continue to be supportive, but will the weakening domestic economy and intensifying trade war force the government to announce new measures. Leaders from China will have their annual economic policy-setting meeting from December 19th to 21st. They should outline their priorities, with the specific targets released in March. If China is going to become more active in the markets, we should not be surprised if we see a decision to cut the one-year lending rate. The market consensus is for the key rate to stay steady throughout 2019, but if we see China wanting to be proactive, they could act very soon.

Oil prices plummeted more than 20 percent during November and are lower 2.5 percent in December. Oversupply concerns remain in place as US shale production surges and slower economic growth globally could signal falling demand.

The Bank of Japan (BOJ) is not expected to make any changes to its ultra-loose monetary policy program as inflation has stalled near 1% and is not anticipated to reach the target before 2021. The Japanese economy has posted some mix data, with recent natural disasters hurting GDP and putting it at risk of hitting a recession. Reviving inflation is still the primary focus and no major new actions are expected.

The Bank of England is expected to keep Interest Rates unchanged 0.75 percent in an unanimous vote. While the data has been mixed for the UK, Brexit will remain on the front burner. Expectations are still for BOE’s next move to be a rate hike, but we will have to wait until the February 7th meeting for further clarity.