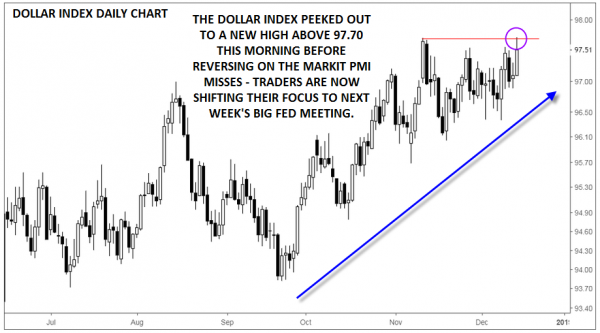 Generally speaking, US traders have been focused on the other side of the Atlantic this week, with particular attention on the continued Brexit drama and the mostly as-expected ECB meeting. With those situations (at least temporarily) behind us, the market’s eye has shifted back stateside in advance of next week’s highly-anticipated Federal Reserve meeting.

A series of economic reports this morning may prompt Fed policymakers to raise their eyebrows, though it’s a bit late in the game to deviate from next week’s (assumed) interest rate increase.  November’s Retail Sales report printed at +0.2% m/m, a tick above the market’s expected +0.1% reading. Bolstering the strength of the report, sales in the report’s “control group” (a cohort seen as more representative of underlying consumer demand) rose +0.9% m/m, more than twice the median economists’ estimate. In a separate report, Industrial Production rose +0.6% m/m vs. +0.3% eyed, though the previous month’s report was revised lower.

While the retail sales report and industrial production reports were both solid, the forward-looking Markit PMI readings for December were more concerning. Both the manufacturing and services PMI figures came in lower than expected, as well as lower than last months’ readings. Overall, the composite Markit PMI reading printed at 53.6, the lowest level of economic activity since May 2017. In the words IHS Markit’s Chief economist Chris Williamson, “The flash PMIs bring signs of the US economy ending 2018 on a softer note. With business activity expanding at the slowest rate for one and a half years, the surveys indicate that the pace of economic growth has faded to 2.0% in December albeit closer to 2.5% for the fourth quarter as a whole…amid uncertainty about the economic outlook, linked in part to growing geopolitical concerns and trade wars.”

Today’s hour-by-hour price action in the greenback reflects traders’ evolving views on the US economy. After the better-than-expected Retail Sales and Industrial Production reports, the US Dollar Index peeked out to a fresh 2018 high above 97.70. However, the progress was short-lived, with the disappointing Markit PMI readings taking rates back down to the mid-97.00s, where they remain as of writing.

Moving forward, the dollar’s prospects will hinge on next week’s Fed meeting. At this point, the market has discounted a “dovish hike,” meaning that the central bank will raise interest rates but policymakers will ratchet down their expectations for future increases in 2019 (from September’s three projected hikes).If Powell and Company vote unanimously next week and strike an optimistic note on 2019 (i.e. by projecting another two interest rate increases), the greenback could surge out of its recent consolidation to trade at 18-month highs above 98.00. On the other hand, a very cautious statement, any dissenting voters, or a revision down to just one projected rate hike in the median Fed policymakers outlook for next year could take the dollar index back toward 96.00 by Christmas.