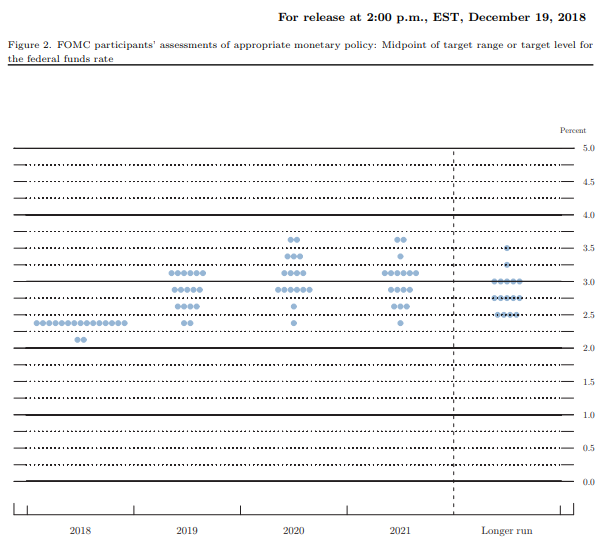 The Federal Reserve said Wednesday it now expects just two rate hikes in 2019, one less than it had previously forecast in September.

In its economic projections, the Fed reduced its forecast for the federal funds rate. It said it expects the benchmark rate near 2.9 percent by the end of next year. It had previously projected that rate to be about 3.1 percent.

For 2020, the Federal Open Market Committee said it still expects one rate hike. The policymakers also said it anticipates the federal funds rate to be about 3.1 percent by the end of that year.

Many economists had projected that the U.S. central bank would reduce its forecast for rate hikes.

Four times a year Federal Reserve policymakers at the FOMC submit their projections about where short-term interest rates are headed. The results are the central bank’s so-called dot plot — a visual representation of how many members think rates will hit a given level over the short, medium and longer run.

As widely expected, the Federal Open Market Committee raised the federal funds rate 25 basis points to a range between 2.25 percent and 2.5 percent.

This is breaking news. Please check back for updates.