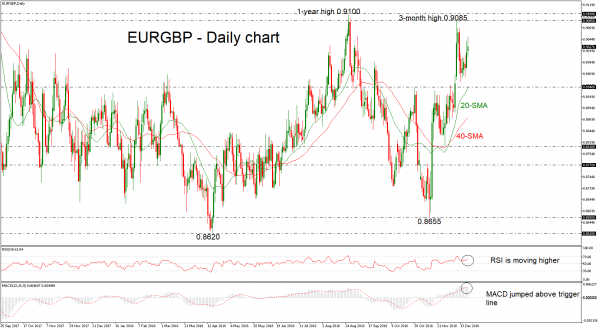 EURGBP has been edging higher since Wednesday’s session, remaining above the strong support level of 0.8940. The technical structure endorses the short-term bullish sentiment as the RSI is heading towards the overbought level and the MACD oscillator created a positive crossover with the trigger line above the zero line. Also, the moving averages are pointing upwards in the daily timeframe.

A further upside run in the price may retest the previous peak of the three-month high of 0.9085 before targeting the one-year high of 0.9100. Above that, investors would be interested to see whether bullish dynamics can overcome the previous peak and meet the 0.9300 psychological hurdle.

Alternatively, a decline in the price may retest the 0.8940 support barrier, which coincides with the 20-simple moving average (SMA), before challenging the 40-SMA around 0.8872 at the time of writing. More downside pressures could send prices until the 0.8810 hurdle, identified by the bottom on November 28.

To conclude, the short-term outlook is bullish, however, in the long-term picture the price lacks direction.