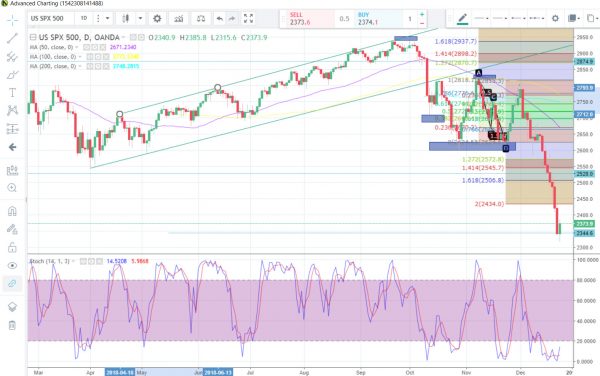 Stocks opened higher in NY after some market participants return from holiday. Over the holiday, President Trump attempted to assuage markets with votes of confidence in the US economy and Treasury Secretary Mnuchin. Mnuchin on Christmas Eve made calls with the heads of the six largest US banks. He confirmed they have enough liquidity to continue lending and that markets could continue to function properly. His decision to have a call with the President’s Working Group on financial markets crushed sentiment on what was supposed to be a thin trading session. The President reportedly has been getting increasingly frustrated with Treasury Secretary Mnuchin, despite publicly supporting him. The S&P 500 index fell 2.7% on Monday, the worst Christmas Eve ever, beating the 0.7% drop in 1985. This morning’s rebound occurs while most of Europe is closed for Boxing Day holiday. The government shutdown persists, and today’s session should remain choppy.

Everyone will watch to see if the S&P 500 Index can close into bear market territory and below the $2,344.60 level. Price action on the S&P 500 daily chart displays the acceleration lower took place once price formed a death cross early in December. Looking at the charts, one could think that US economy is already in a recession, but that is not quite the case just yet. Growth may slow 2% in 2019, but we should still be over a year or two from a recession. Another reason to be optimistic is if we see further progress with trade talks, which would alleviate global growth concerns. If we see the Fed catch up with the markets’ dovish expectations and that could be supportive for a softer dollar and stronger for equities. The current government shutdown is likely to persist a little more, but we may not see be enough of a catalyst to take stocks another major leg lower. The current sell-off could also pose a great entry for long-term value investors who are aiming to hold positions between 3 and 5 years.