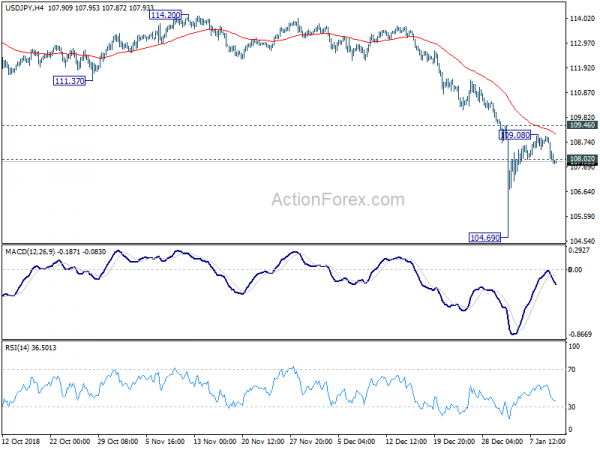 Dollar is turning mixed in Asian session today, but it remains the weakest one for the week. The greenback was knocked down by a wave of cautious comments from Fed officials, as well as the FOMC minutes. In short, Fed could be “patient” before making another rate move. And this is actually inline with market pricing that Fed will not raise interest rates again this year. The deadlock over US government shutdown is another factor weighing on Dollar. Trump stormed out of the talks with Democrat leaders of the Congress yesterday and complained the meeting at the White House was a “total waste of time”.

Elsewhere in the currency markets, Canadian Dollar is the weakest one for today after yesterday’s BoC rate decision. BoC stood pat and lowered 2019 growth and inflation forecast. New Zealand Dollar follows as second weakest, then Sterling. Australian Dollar is so far the strongest one for today, followed by Yen, and then Swiss Franc. (if you want to trade professionally use our forex advisor download, Look our videos with forex robot for auto trading… )

Comments from Fed officials yesterday were generally cautious in tone. And it seems there is consensus that Fed should be “patient” before making another rate hike. Boston Fed President Eric Rosengren said “there should be no particular bias toward raising or lowering rates until the data more clearly indicate the path for domestic and international economic growth”. And he added “I believe we can wait for greater clarity before adjusting policy.”

Chicago Fed President Charles Evans said “because inflation is not showing any meaningful sign of heading above 2 percent…I feel we have good capacity to wait and carefully take stock of the incoming data and other developments”. Atlanta Fed President Raphael Bostic said “the appropriate response is to be patient in adjusting the stance of policy and to wait for greater clarity about the direction of the economy and the risks to the outlook”

FOMC minutes of the December meeting also reflected the cautious tone. They noted that “many participants expressed the view that, especially in an environment of muted inflation pressures, the committee could afford to be patient about further policy firming.”Also “a number of participants noted that, before making further changes to the stance of policy, it was important for the committee to assess factors,” including risks on growth and the impact of past rate hikes on the economy. Read more forex news…

Summary of statements from China MOFCOM and USTR on trade talks

In a relatively brief statement, the Chinese Ministry of Commerce said the trade talks with the US this week were extensive and laid down the foundation for resolving trade friction between the countries. The MOFCOM statement said “The two sides actively implemented the important consensus of the two heads of state and conducted extensive, in-depth and meticulous exchanges on trade issues and structural issues of common concern, which enhanced mutual understanding and laid the foundation for resolving mutual concerns. Both parties agreed to continue to maintain close contact.”

In a rather neutral statement, the US Trade Representative detailed the discussions with China in Beijing on January 7-9. Here are what were discussed “ways to achieve fairness, reciprocity, and balance in trade relations”, “ongoing verification and effective enforcement” of the agreement, “achieving needed structural changes in China”. Also, China’s pledge to purchase a substantial amount of agricultural, energy, manufactured goods, and other products and services were also discussed.  *if you want to trade professionally use our forex robot*

EU Trade Commissioner Cecilia Malmström told reporters yesterday that the scope of trade negotiation with the US was not agreed upon yet. But she emphasized that “we have made very clear agriculture will not be included.” In the mean time, EU also haven’t got assurance from the US on holding off auto tariffs during the trade negotiation. But Malmström believed EU won’t be affected while talks were ongoing.

Malmström made the comments after meeting Japanese Minister of the Economy Hiroshige Seko and U.S. Trade Representative Robert Lighthizer in Washington yesterday, in preparation for another meeting later this week regarding WTO reforms.

European Commission is currently preparing two mandates for trade negotiations with the US. One is for removal of tariffs of industrial goods. Another one is on areas of possible regulatory cooperation in areas such as pharmaceuticals, medical devices and cyber security. The mandates will first have to go through European Commission approval, and then the 28 members of EU states. There is no set time line for the preparation yet.

Separately, Republican Senator Chuck Grassley warned that “I don’t know how anybody in Europe that wants a free trade agreement with us can expect it to get through the US Senate if you don’t want to negotiate agriculture.”

UK Hammond: No specific benefits in the current Brexit deal, just much worse with no-deal

Chancellor of the Exchequer Philip Hammond said “I firmly believe that my job is to look after the welfare and interests of the British people and I conclude that it would not be in their interests to leave without a deal”. “We are very determined that we need a deal. We need a deal that allows us to continue to cooperate and to have a smooth and orderly exit and we’ll make sure that we do.”

He urged that “What we and many other British businesses need most urgently, is for politicians from all sides to come together and pass a pragmatic agreement that allows an orderly Brexit”. Though, he added that “We don’t see any specific benefits in the current deal. It’s just a lot less bad than a ‘no deal’”.

But as five-day debate over UK Prime Minister Theresa May’s Brexit deal began in the parliament yesterday, there is apparently no breakthrough. Hammond said there is currently no “plan B” to break the deadlock. Read technicall analysis…

BOC left the policy rate unchanged at 1.75% in January. Policymakers admitted that the decline in oil price has “material” impact on the economy. Yet, they viewed the impact as transitory. Reflecting the view on economy projections, the central bank downgraded the GDP growth forecast for this year, but upgraded it for the next year. Similarly, inflation is trimmed for this year due to weakness in oil prices.

On the monetary policy stance, BOC retained the view that interest rates would “need to rise” and the decision would be data-dependent. Yet, this time the central bank added that a rate hike would come “over time” and the pace would highly depend on “developments in oil markets, the Canadian housing market, and global trade policy”.

More in BOC Pushed Back Timing for Next Rate Hike, Trimmed GDP Growth and Inflation Forecasts for 2019

Looking ahead, US jobless claims, Canada new housing price index and building permits will be released.

Break of 108.20 minor support suggests that USD/JPY’s corrective rebound form 104.69 short term bottom has completed at 109.08 already. Intraday bias is turned back to the downside for retesting 104.69 low first. In case of another recovery, upside should be limited 109.46 minor resistance. Overall, larger downtrend from 118.65 (2016 high) is expected to resume finally through 104.62 after current consolidation from 104.69 completes.