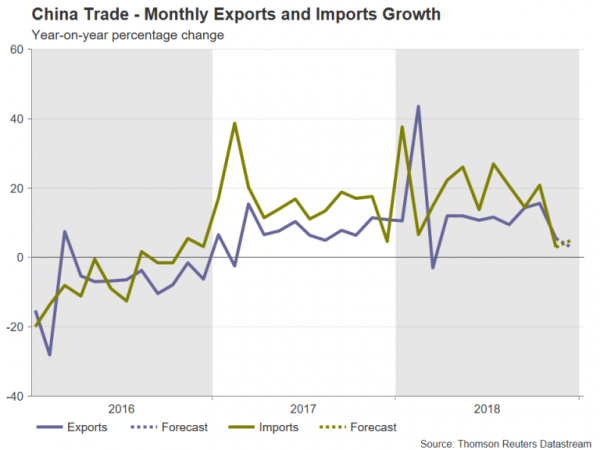 Brexit fatigue looks set to reach a climax next week as UK lawmakers will finally get their say on Theresa May’s deal. But with little chance of the deal passing through Parliament, stormy days lie ahead for sterling. On the data front, inflation will be the dominant theme, while the US housing market will also come under the spotlight, assuming the government shutdown doesn’t cause a delay to the scheduled releases.

China will publish its latest monthly trade numbers on Monday, as negotiations with the US head for a long, drawn-out process. The two sides concluded three days of talks this week, which ended with substantial progress on many issues but with plenty of outstanding ones remaining. A weak set of trade figures would likely add to the pressure on Chinese authorities to quickly resolve their differences with the US. Exports from China are forecast to have grown by 3% year-on-year in December, easing from the prior 5.4%. Imports are expected to have accelerated, however, from 3% to 5.0%.

Any negative shock in the trade data could knock the Australian dollar off the one-month high it scaled this week versus its US counterpart. The aussie is highly sensitive to developments relating to China’s economy given Australia’s reliance on the country for its exports market. (if you want to trade professionally use our forex advisor download, Look our videos of automated trading at forex… )

Inflation to be the focus in Japan

Japan will publish corporate goods and consumer prices next week along with machinery orders. December corporate goods prices (Japan’s equivalent of producer prices) and November machinery orders (an important forward indicator of business investment) are due on Wednesday, with CPI figures following on Friday. Core CPI, which excludes fresh food prices and is targeted by the Bank of Japan for its 2% price goal, is expected to have moderated further in December to 0.8% y/y.

With the data unlikely to alter the near-term inflation outlook in Japan, it’s not anticipated to receive a lot of attention from yen traders as the Japanese currency tends to be driven more by risk sentiment than the domestic economy.

A dollar pullback lifted the euro to 3-month highs this week despite more worrying indicators on the health of the Eurozone economy. Data in the coming days will probably continue to paint a bleak picture, with investors eyeing Monday’s industrial production numbers for the euro bloc and Tuesday’s 2018 GDP estimate for Germany. Industrial output is forecast to have contracted by 1.0% month-on-month in November, more than reversing the prior 0.2% gain. Meanwhile, the Eurozone’s largest economy, Germany, is projected to have grown by 1.5% in 2018, slowing from the 2.2% rate observed in 2017.

Also due out of the Eurozone are the final inflation readings for December on Thursday. The final CPI prints aren’t expected to generate much reaction as no change to the initial estimates have been pencilled in by analysts. However, any surprise revision, mainly to the two core rates, could stoke some volatility in the euro, particularly if it is a downward one. Otherwise, the single currency could maintain its impressive year-to-date recovery against the greenback.

NOTE: You can not find the right trading strategy? if you have no time to study all the tools of the trade and you have not funds for errors and losses – trade with the help of our autotrading mt4 robot developed by our professionals. Also you can testing in Metatrader our forex scalping robot free download .

All eyes on Westminster; investors hold tight for bumpy ride

The UK will be another country to release December inflation figures. The CPI report is out on Wednesday and will be followed on Friday with retail sales numbers. The headline rate of inflation is forecast to have eased by 0.1 percentage point to 2.2% y/y in December, while the core rate is anticipated to hold steady at 1.8%.

With the Bank of England not expected to raise interest rates unless Parliament approves a smooth Brexit, the inflation data is unlikely to have much impact in currency markets. Retail sales on the other hand could see a stronger response by traders as it’s a better gauge of UK growth momentum. Retail sales are forecast to have slumped by 1.1% m/m in December after a 1.4% surge in the prior month, with the annual rate projected to have slowed to 3.3%.

Ahead of the data though, is a major risk event on Tuesday when the House of Commons will vote on May’s much-criticised Brexit deal. If, as expected, the deal is rejected by MPs, Mrs. May will have three days to present Parliament with an alternative plan. With the number of possibilities – ranging from a snap election to a second referendum to a cancellation of Article 50 – being so varied, the pound is likely to gain from any attempt by lawmakers to block or delay Brexit but tumble sharply from signs the UK is steering towards a crash exit from the EU. Use our Portfolio of forex robots reviews…

US manufacturing gauges to draw attention

On Wednesday, retail sales will be the main highlight. Retail sales are forecast to have risen by 0.2% m/m in December. The focus will then turn onto the housing sector with the release of the NAHB housing market index for January, followed by December housing starts and building permits on Thursday. Note, however, that federal agency reports may get postponed due the ongoing partial government shutdown in the US.

Any disappointing reading in the above data could add to the downside pressure currently affecting the US dollar as it would solidify bets that the Fed won’t be raising rates this year. Read more forex news…

Wrapping up the week on Friday are industrial output numbers for December and the University of Michigan’s preliminary print of the consumer sentiment index. North of the border, Canadian inflation figures will be scrutinized on Friday following the Bank of Canada meeting this week that signalled more rates increases in 2019. Investors had all but priced out a rate hike for this year but the BoC appears to have shifted to a merely cautious stance as opposed to a dovish one. Any positive surprise in the CPI numbers could contribute to the loonie’s upside correction.