Signs of a Thaw in US Government Shutdown Negotiations Ahead of a Busy Week for US Stocks? 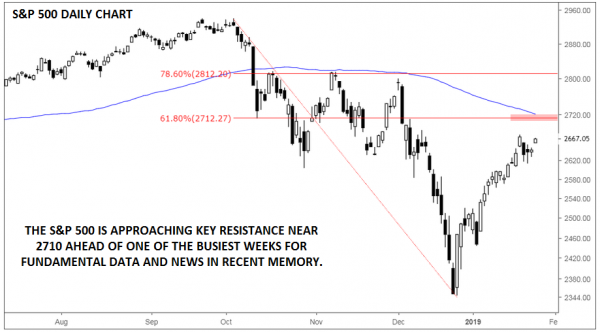 When yesterday’s dueling Democratic and Republican proposals to open the government both failed to garner nearly enough votes in the Senate, it assured that 800,000 government employees would go a whole month without receiving a paycheck. However, it’s often said that “the night is darkest just before the dawn,” and there are some signs that yesterday’s failed votes may serve as the catalyst for a true compromise to end the stalemate.

Shortly after the failed votes, Senate Majority Leader Mitch McConnell invited Minority Leader Chuck Schumer into his office to negotiate. Meanwhile, a bipartisan group of 16 senators (eight from each party) took to the chamber’s floor to say they want to reopen the government for three weeks to allow time for work on a bipartisan border security deal.

Perhaps most importantly of all, a spokesperson for Donald Trump stated the President would agree to a temporary end to the shutdown if Congress provides a “large down payment” for the border wall. While any funding for the wall appears to be a non-starter among Democrats, the fact that all parties appear to be softening their stances raises the odds of a potential breakthrough in the coming days. Indeed, today’s news that the Federal Aviation Administration has halted flights into New York’s La Guardia airport due to a shortage of air traffic controllers may perversely increase pressure on lawmakers to reopen the government.

Traders are reading the situation the same way, with the S&P 500 rallying by 1% in morning trade. The index has not seen much in the way of follow-through after breaking down from its rising wedge pattern earlier this week. Instead, prices are testing a six-week high and may soon approach the confluence of the 61.8% Fibonacci retracement and the 100-day moving average just above 2700.

Regardless how prices close today’s trade, traders will have to be particularly nimble next week as they navigate a maelstrom of high-impact developments, including government shutdown headlines, the outcome of US-China trade negotiations, a Federal Reserve meeting, major earnings reports (AAPL on Tuesday, MSFT on Wednesday, AMZN on Thursday), and lest we forget, the always-impactful Non-Farm Payrolls report on Friday.

Readers should be sure to rest up this weekend ahead one of the busiest weeks for US stocks in recent memory!