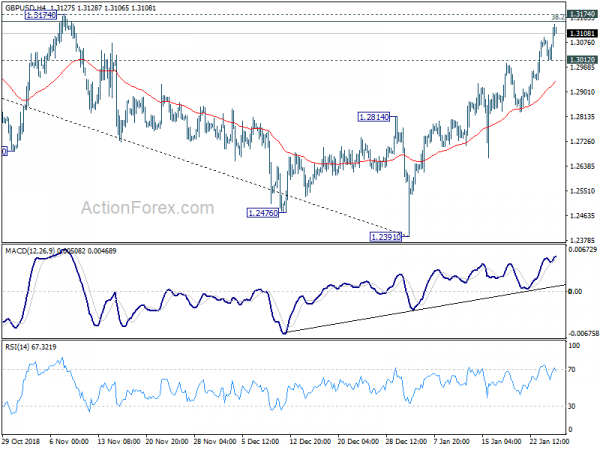 Sterling surges broadly today on rumors that Northern Ireland’s DUP has privately agreed to conditional support to Prime Minister Theresa May’s Brexit deal. The Pound is also the strongest one for the week. While there are still a lot of uncertainties surrounding Brexit outcome, at least, the threat of no-deal Brexit is eased. However, we’d doubt if the rumored condition of time limit on Irish backstop would get agreement from Brexit hardliners and the EU. Canadian Dollar, second strongest for today, follows oil price higher, as US threatens to sanction Venezuela.

Staying in the currency markets, Yen is trading as the weakest one for today, following strong risk appetite in Asia. Tech stocks led the way higher while investors shrug off conflicting comments from the US regarding trade negotiation with China. On the one hand, Commerce Secretary Wilbur Ross said the two countries are “miles and miles” away on a trade deal. But White House economic adviser Larry Kudlow said Trump is optimistic. Dollar follows as the second weakest. Euro is mixed after some knee-jerk actions follow ECB meeting yesterday.

Technically, GBP/USD is now close to structural resistance at 1.3174, which is close to 1.3149 fibonacci level. We’d expect strong resistance in this zone to complete the rebound from 1.2391. But we’ll see how it goes. EUR/GBP breached 0.8620 key support today. For now, we’d also look for strong support at current level to bring rebound. However, sustained break of 0.8620 will resume larger fall from 0.9305 (2017 high).

Sterling surges broadly again on hope that UK Prime Minister Theresa May inches closer to getting enough support for an amended Brexit deal. The Sun reported that North Ireland’s DUP is having delicate deliberations with May. And it’s privately agreed that DUP will support the Brexit plan if there is a time-limit of the Irish backstop. That