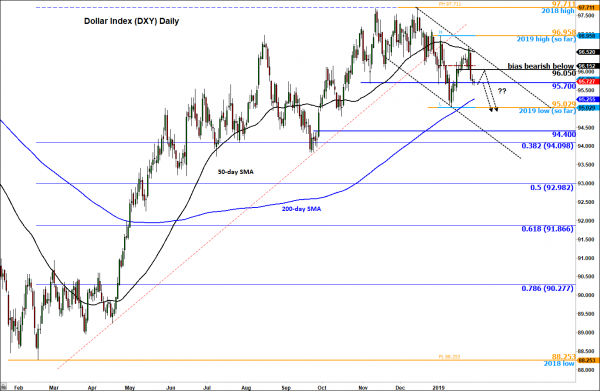 If it feels like it has been a quiet-ish start to the week for FX, it is because it has. But as my colleague Matt Weller pointed out yesterday, this could be the “calm before the storm.” Brexit-related headlines should keep sterling traders busy this evening as MPs vote on a number of amendments to PM Theresa May’s bill that was rejected overwhelmingly a couple of weeks ago, while the Federal Reserve meeting on Wednesday and the US nonfarm payrolls report on Friday should provide more meaningful direction for the dollar and the wider markets in general. Let’s not forget about the ongoing US-China trade dispute. After the US justice department decided to charge Huawei with conspiring to violate sanctions on Iran, China has hit back and accused the US of being “unfair and immoral” as it urged Washington to stop its “unreasonable suppression” of the company. Things could potentially flare up again on Wednesday when Chinese Vice Premier Liu travels to Washington to speak with his US counterparts, Trade Representative Robert Lighthizer and Treasury Secretary Steven Mnuchin.

Ahead of the above fundamental events, the dollar has started the week how it ended the last one: lower. But I do think there is a good possibility that the greenback falls further later on in the week. The Fed is likely to re-iterate that interest rates won’t be going up again soon and may signal that it will maintain a larger portfolio of assets it currently holds, thus putting an earlier end to its wind-down. The Fed may warn that risks facing the US economy have risen, due, for example, to a slowdown in growth in China and other emerging market economies, while domestically the impact of the tax-cut boom is fading.

From a technical point of view, things aren’t looking too rosy for the dollar ever since its sharp fall on Friday, when it more than gave up its gains made the day before. The reversal saw the Dollar Index break support around 96.05 – this level is now the most important short-term resistance to watch. Friday’s selling pressure came in around 96.50, which is roughly where the 61.8% Fibonacci retracement against last year’s high (not drawn on the chart) converged with the now downwardly-sloping 50-day moving average. The slope of this MA is an objective warning sign that the bullish trend may be over. Subjectively, one can also see a bearish channel forming. Within the channel, the DXY has been putting in a few lower lows and lower highs.

So, the technical outlook on the dollar doesn’t look too great at the moment. However, the dollar bulls would argue that the current weakness is just a retracement of the large gains made last year. Indeed, the DXY hasn’t even reached the shallow 38.2% against last year’s low yet. Therefore, that the current bear channel may turn out to be a long-term bull flag pattern and that a potential break above the resistance trend of it would be the trigger.

Both the bulls and bears have equally compelling points on the direction of the dollar. I guess, we can help settle the argument simply by stating that the bears have the upper hand right now, but how long they will be able to retain control is up for debate. As things stand, we remain bearish on the DXY for as long as it holds within its channel and ideally below the key 96.05 resistance. As such, we expect the index to make a new low for the year in the coming days below 95.03 it hit earlier this month.