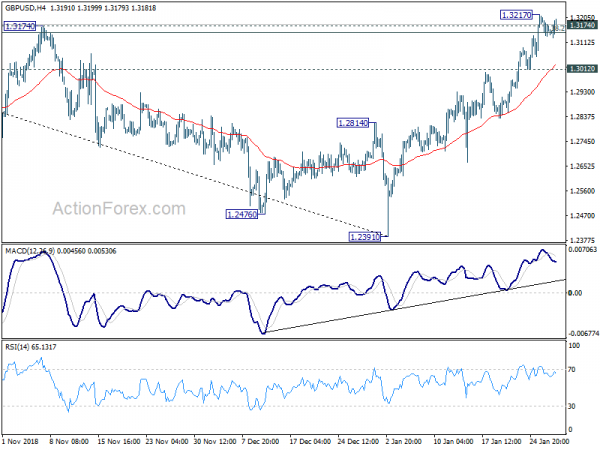 Sterling strengthens broadly today but upside is capped as markets are now watching Brexit debate in the Commons. The opening statement of May was rather dull as she repeated the pledge to deliver Brexit. Meanwhile the situation got more complicated and confusing today as other alternatives emerge, most notably the so-called Malthouse Compromise. The Pound will likely be confined in tight range until UK politicians show what exactly they’re going to do next.

Staying in the currency markets, New Zealand Dollar is the second strongest one for today, followed by Canadian Dollar. Swiss Franc and Yen are the weakest as European stocks reversed early losses and are trading generally higher. Dollar is mixed as the markets await more information regarding US-China trade negotiations. But for now, only Treasury Secretary Steven Mnuchin has come out to say that Huawei’s case and trade talks are “separate issues”.

Technically, major pairs and crosses are generally bounded in very tight range. GBPUSD is back pressing 1.3174 key resistance. EUR/GBP also lost momentum ahead of 0.8725 minor resistance and could be heading back to 0.8620 key support. These two levels are crucial to decide Sterling’s next short to medium term move.

UK PM May to push EU to reopen Brexit negotiations

UK Prime Minister Theresa May has told her cabinet today that Brexit negotiation has to be reopened with the EU, to provide legal changes to the Irish backstop. Her spokesman said that “the prime minister said that in order to win the support of the House of Commons legal changes to the backstop will be required, that would mean reopening the Withdrawal Agreement”. And he added that “a vote of the Brady amendment makes it clear that the current nature of the backstop is the key reason that the House cannot support the deal.”

Also, May is expected to return to the Commons as soon as possible with a revised deal with the EU. If no deal could be reached by February 13, May will make a statement to the House that day, and table an amendable motion for debate the follow day.

As for today, a so called Malthouse Compromise emerged which has support from heavy weight Brexiteers, Remainers as well as Northern Ireland DUP. But EU was quick to dismiss it. EU’s deputy chief negotiator, Sabine Weyand, had said technology to avoid a hard border does not exist.

UK Trade Minister Liam Fox said today that EU is now more afraid of no-deal Brexit due to economic slowdown , including Germany and France. Fox said “there have been some changes in the positions in recent times, dictated by reality”.

The office noted in the monthly report that “we need to keep in mind that there is uncertainty about how trade disputes and China’s economic outlook will affect the global economy.”

On inflation, the report noted that consumer prices have leveled off. It’s another downgrade from last month’s description that gains were slowing. Consumer spending was recovering while capital expenditure was increasing. Both assessments were unchanged.

Australia NAB Business Confidence was unchanged at 3 in December. However, Business Conditions dropped sharply by -9 pts from 11 to 2. That’s the largest monthly fall since the global financial crisis. And the deterioration was “relatively broad-based across states and industries”. NAB also noted that “at face value, the fall over the past 6 months suggests a significant slowing in the momentum of activity in the business sector – especially from the highs seen earlier in the year.”

Intraday bias in GBP/USD remains neutral at this point. Focus stays on 1.3174 key resistance. Sustained break above 1.3174 will suggest that whole decline from 1.4376 has completed at 1.2391 on bullish convergence condition in daily MACD. Further rise should then be seen to 61.8% retracement at 1.3618. On the downside, however, break of 1.3012 support will suggest rejection by 1.3174 key resistance, and turn bias to the downside for 1.2814 support.