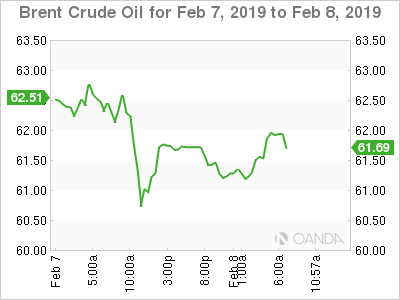 Friday February 8: Five things the markets are talking about

Investor worries over economic growth and trade disputes have pushed global equities towards their first weekly loss in nearly two-months. Oil and metals are under pressure, while yen and sovereign bond prices have pushed a tad higher.

Equities in Asia mostly saw red on the news that President Trump is unlikely to meet with China’s Xi before the March 1 tariff deadline.


This week saw some central banks revise down economic growth and who have adopted a more ‘dovish’ stance – Fed, ECB, RBA, RBI and BoE.

The RBA has adopted a “neutral” policy bias, stating that the Australian economy “could be weaker than it thinks and that the risks to the economic outlook are more balanced.”

Nevertheless, Governor Lowe remains upbeat on the Aussie job market, but has given the RBA the latitude to cut interest rates should growth fall short of expectations and the unemployment rate start to rise.

The RBI cut its Repurchase Rate unexpectedly by -25 bps to +6.00% for its first cut since Oct 2016 and has changed its policy stance to “neutral” from calibrated tightening.

No surprises from the BoE on Thursday – It slashed its growth forecast for 2019 (+1.2% from +1.9%), citing the impact of weaker demand for British exports, and the effect of uncertainty about the country’s departure from the E.U on investment and consumer spending.

Trade tensions, falling demand from China, protests in France, concerns over Italy’s debt, and weakening manufacturing and export outlook in the EU’s powerhouse, Germany. The possibility of a hard Brexit is also fuelling uncertainty and raising the threat of greater-than-anticipated disruption.

In Japan, the Nikkei fell on concerns about slowing corporate earnings growth. The index share average dropped -0.6%, while the broader Topix declined -0.8%.

Down-under, Aussie shares ended lower overnight, with energy and mining stocks accounting for more than half of the losses on Sino-U.S trade tensions. The S&P/ASX 200 index fell -0.34%. The benchmark rose +1.1% yesterday and was up +3.4% for the week. In S. Korea, the Kospi index fell -1.2% on intensifying trade tensions.

In Europe, regional bourses are trading mixed this morning following a sharp sell off yesterday as Brexit developments and Sino-U.S remain the focus.

Oil fell more than -2% yesterday on investor concerns that global demand growth would lag in 2019. Also, not providing support, are worries that a trade war between the U.S. and China would continue, weighing on demand and that oil producers would not adhere strictly to cuts agreed to last year.

Crude fundamentals are not helping, as weekly data published by the U.S EIA mid-week showed an unwelcome increase in stocks of crude oil.

Crude bulls have been pinning their hopes on OPEC+ production and a squeeze on supply from Iran and Venezuela, due to U.S sanctions, would lead to the market being balanced this year.

And another factor weighing on oil prices this week has been a stronger U.S dollar.

Ahead of the U.S open, gold is trading steady on worries that a prolonged Sino-U.S trade war could worsen global economic slowdown, but a strong dollar has put the yellow metal in line for its first weekly loss in nearly a month. Spot gold is steady at +$1,309 per ounce, while U.S gold futures are down -0.1% at +$1,312.70.

Safe-haven government bonds have benefited the most on growing investor anxiety over the global outlook, with German and Japanese debt yields falling to their lowest in over two-years.

Germany’s 10-year Bund yield is just +10 bps away from “zero” percent. Analysts note that its “now in territory that reflects dire concern about economic conditions.”

Note: Three months ago, German bonds out to six years had sub-zero yields.

Elsewhere, British gilt yields hit an eight-month low yesterday after the BoE cuts its growth estimates. Overnight, Japan’s 10-year JGB yield fell to a five-week low and U.S. Treasury yields are down -5 bps this week in a third week of falls.

Elsewhere in Europe, there are some signs of stability in Italy’s bond market, where yields edged lower after sharp increases this week – yields aggressively backed up as weak Italian data supported investor worries about a deterioration in public finances. Italy’s 10-year BTP yield is a tad lower at +2.94% this morning – it has risen some +20 bps this week.

EUR/USD still managing to trade above the psychological €1.13 level as the economic data and commentary for Europe appears somewhat dire. Yesterday, the E.U Commission released its 2019 winter forecasts which had been pared back rather aggressively. The market now believe the ECB will also present lower growth forecasts when the staff projections are updated next month. This has futures dealers pricing in “new easing” and postponing of tightening from the ECB.

GBP/USD is a tad stronger by +0.14% at £1.2965 area in the aftermath of yesterday’s BoE rate decision. The central bank voted unanimously to keep the Bank Rate at 0.75% but lowered both its GDP and CPI inflation projections. The pair is well off yesterday’s low as participants noted that the BoE made no major policy shift and continues to see the next move in rates as higher.

Germany’s Federal Statistical Office (FSO) this morning reported that exports in December increased +1.5% from the month before while imports rose +1.2%, both figures seasonally adjusted.

Digging deeper, compared with December 2017, exports to EU member states fell -4.6%. Shipments to the eurozone declined -4.1% and those to non-eurozone countries posted a steeper drop of -5.5%.