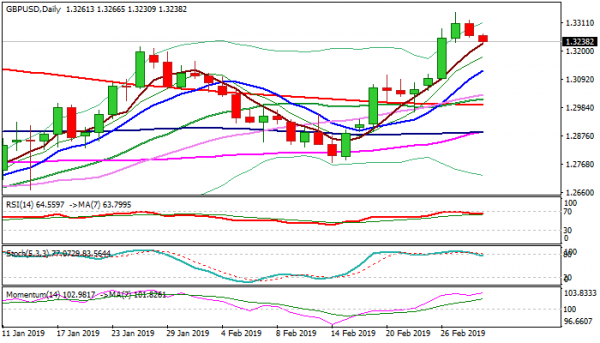 Cable holds in red for the second day and tested initial support at 1.3230 (rising 5SMA) on Friday.

Profit-taking after strong rally this week could push sterling lower, as slow stochastic reverses from overbought territory and supports scenario.

Pound was boosted strongly by reduced fears about no-deal Brexit last week, but the optimism starts to fade, as there are no further changes in Brexit process, except that UK’s exit from the Union could be delayed, but this seems to be already priced in.

However, the pair still holds strong bullish momentum that could limit dips, as there are a plenty of space towards key support at 1.3129 (rising 10SMA / Fibo 38.2% of 1.2772/1.3349 rally), violation of which is needed to generate reversal signal.

Install your trader software at VPS server of one of the super fast providers:</st