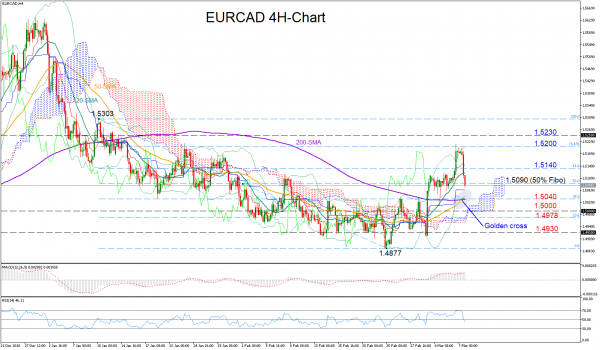 EURCAD is going downhill in the 4-hour chart, retracing all the gains it collected on Wednesday after piercing the upper Bollinger band.

The MACD has slipped below its red signal line and the RSI dipped below its 50 neutral mark, both endorsing the negative mood in the market. The golden cross between the 50- and the 200-period moving averages (MA) on the 4-hour chart though, which is the first registered since November’s rally is trend-positive, flagging that today’s sell-off could be temporary and that the recent uptrend is likely to extend further. Yet a larger distance between the lines could be more convincing.

The 38.2% Fibonacci of 1.5040 of the downleg from 1.53 to 1.4877, which is located at the crossroads of the 50- and the 200-period MAs could provide nearby support if the downfall picks up steam. A leg below that key barrier could open the door for the1.50 psychological mark, while further deterioration could also retest the congested area around the 23.6% Fibonacci of 1.4978. If the latter proves a weak obstacle, then bearish pressure could continue until 1.4930.