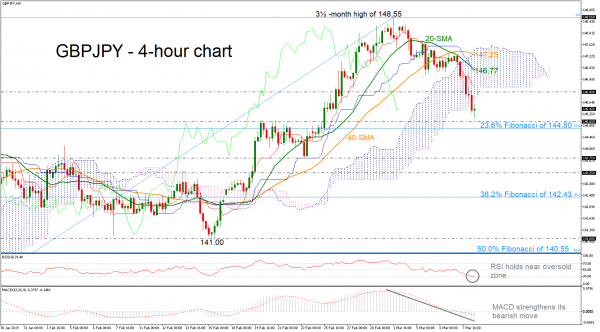 GBPJPY is edging lower towards a one-and-a-half-week low of 145.11, exiting from the Ichimoku cloud in the 4-hour chart, after it unlocked a fresh three-and-a-half-month high on March 1. The bearish momentum in the MACD points to further decline in the short-term. Yet with the RSI standing near its 30 oversold level, it seems that the strong bearish view may change, and the bulls could soon take over.

On the flipside, if the recent bearish rally proves overdone, the price could shift up to meet the 146.00 psychological level, near the lower boundary of the Ichimoku cloud. Heading higher, resistance could come next from the 20- and then from the 40-simple moving averages (SMAs) at 146.77 and 147.25 respectively, while more upside run could touch 148.55.

In the medium-term outlook, GBPJPY has been remaining bullish thanks to the rebound on the two-year low of 132.50 on January 3.