Silver Rises after Strong Downfall from 16.20 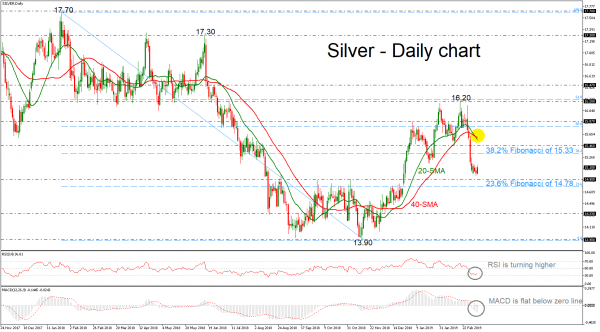 Silver came close to breaking the 14.90 support level on Thursday, finishing the day at a two-and-a-half-month low of 14.96. According to the RSI, the market could shift higher as it is sloping slightly upwards in the negate zone, though the MACD oscillator is losing its strong downside momentum in the bearish territory. Also, the 20- and 40-simple moving averages completed a bearish crossover in the daily timeframe, confirming the recent negative view.

If the price heads higher, immediate key resistance could come from the 38.2% Fibonacci retracement level of the downleg from 17.70 to 13.90 around 15.33, which if successfully broken the door could open for the 15.46 resistance, identified by the inside swing bottom on February 14.

On the other hand, further losses, could send the commodity below the 14.90 support, resting near the 23.6% Fibonacci region of 14.78. Should traders continue to sell, the next hurdle to focus on is the 14.33 support hurdle, taken from the minor low on December 6.

Turning to the long-term picture, the outlook has been cautiously negative since July 2016.