Saudis are Doing Whatever it Takes to Keep Oil Higher 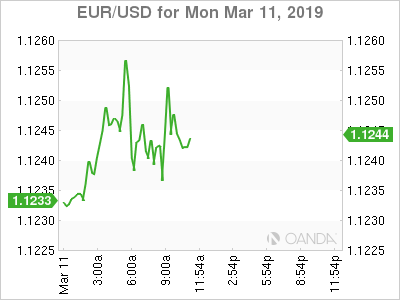 Fed Chair Powell maintained his dovish pivot over the weekend, with the most interesting comment being he will likely not overreact if inflation is modestly above their target.  Dovishness was confirmed at both a speech late on Friday in Stanford, California and during his interview on 60 Minutes.  Powell noted the Fed will watching retail sales data to see confirmation that consumer spending will rebound.  On Quantitative Tightening (QT), he expects to announce a new plan “reasonably soon”.   Retail sales did rebound in January, but December was revised even lower.

We will next hear from Powell at the March 19-20th policy meeting.  Softer growth is expected by Wall Street and downgrades to the economic forecasts are expected.  The rate projections will likely deliver a downgrade in the forecast for this year, from two hikes to one hike or possibly no hikes.

President Trump’s fiscal 2020 budget will anger Democrats and is expected to be rejected by Congress.  The President is expected to cut non-defense spending by 5%, while increasing military spending and raising $8.6 billion for his wall along the Mexican border.  Trump’s skinny budget would mean we would not see a balanced budget for 15 years.  It is also under the assumption the US would maintain stronger economic growth.

Trump’s budget is expected to be released at 11:30 a.m. EST on the Office of Management and Budget’s website.  The US will need to see political leaders agree on funding by October 1st, which is around the same deadline for raising the debt limit.  Trump is no stranger to government shutdowns and this budget battle will likely go down to the wire, which means the severe economic risks of a default may rattle the markets closer to the summer time.

Saudis are determined to regain control of the oil market as they will pump well below 10 million barrels per day (bpd) in April, with exports seen below 7 million bpd.  Saudi Arabia is delivering significantly less oil to their oil customers is providing a slight bid for oil.

Oil’s gains were capped as the EIA 2019 oil report reminded us that US will drive global oil supply growth over the next five years because of its shale industry.  The EIA sees demand increasing at an annual pace of 1.2 million bpd to 2024.

Crude prices have been rangebound since mid-February with the recent headlines giving a slight edge to the argument that the OPEC-led production cuts are helping rebalancing the oversupplied market.  The US will become a net exporter with oil by 2021 and the market might start to be more sensitive to rig count data from the US.  When we start to see rig counts rise back to the levels we saw in 2014, we could see oil pullback sharply.

Dow is being dragged lower after a second deadly crash involving a Boeing 737 Max plane led China, Indonesia and Ethiopia to ground the aircraft.  The 737 Max is key for Boeing and generates almost one-third of their profit.  Many details still need to be discovered about the tragic crash, but initial assessments are that this could be a training issue.  The Boeing 737 plane has its engines ahead of the wings to save 14% in fuel consumption.  The Maneuvering Characteristics Augmentation System may have led the plane to overcompensate trying to level off the plane.  Many analysts are comparing this Boeing crash in Indonesia.

The precious metal kept a soft tone to start the week as investors abandoned gold ETF holdings for a fifth week.  Gold last week rose sharply after a poor US jobs number but was unable to capture the $1,300 oz level.  As trade optimism grows for a deal between the two largest economies, traders may need a fresh catalyst to see higher prices.