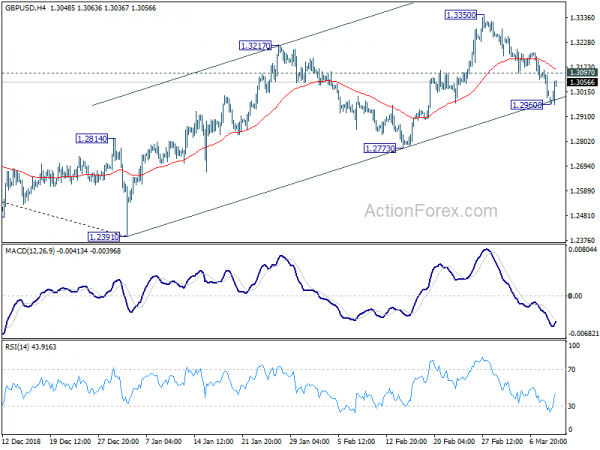 Risk markets attempt to recover today but lacks clear momentum. Nonetheless, that’s enough to send Swiss Franc generally lower. At the time of writing, Canadian Dollar is the second weakest. Dollar follows as third weakest despite better than expected retail sales. Sterling on the other hand recovers broadly after being pressured earlier today. The Pound is paring some losses ahead of the Brexit votes this week. Just like the EU, Sterling is awaiting some clarify on what the UK would like to do regarding Brexit.

Technically, GBP/USD recovers after hitting near term trend line support and focus is back on 1.3097 minor resistance. Break will indicate completion of pull back from 1.3350. EUR/CHF rebounds strongly after testing 1.1310 near term support and retains near term bullishness. Meanwhile, Dollar is still in consolidation against Euro, Swiss Franc, Aussie and Loonie. The greenback’s retreat mildly extend lower.

US January retail sales came in stronger than expected by Dollar shrugs. Headline retail sales rose 0.2% mom in January versus expectation of -0.1% mom. Ex-auto sales jumped sharply by 0.9% mom versus expectation of 0.3% mom. However, prior month’s headline sales was revised down from -1.2% mom to -1.6% mom. Ex-auto sales was also revised down from -1.8% mom to -2.1% mom.

UK Prime Minister Theresa May’s spokesman confirmed that there will be a meaningful vote on the Brexit deal tomorrow. But at this point, it’s unsure whether the vote would be on the “agreed” deal with EU, or a “hypothetical” deal that could push EU to concede to.

The spokesman also noted that “It’s important to note the PM spoke to (European Commission President) Jean-Claude Juncker by phone yesterday evening and talks are continuing. The PM and negotiating teams are focused on making progress so we can secure parliament’s support for the deal.”

EU chief negotiator Michel Barnier refused to comment on Brexit negotiations today. Ahead of a meeting of EU ambassadors, Barnier just said “We talked all weekend and now the discussions, the negotiations, are between the government in London and the parliament in London.”

ECB Cœuré: No recession, no turnaround in policy, no need to resume asset purchases

In an interview on March 7, published today, ECB Executive Board Member Benoît Cœuré said the economy slowdown “didn’t come as a surprise” even though it has been “stronger than expected and started sooner”. ECB’s decision last week “don’t represent a turnaround in our policy” but just “carefully calibrated to this diagnosis”. And ECB was just :adjusting to the new reality rather than reversing our course”.

Coeure added “we don’t see signs of a recession at present” and “we don’t see the need” to resume asset purchases. Economic growth is “robust” although it’s “less strong than before”. And it will “take longer for inflation to reach our objective, but it will get there”.

Coeure also said Italy is “in a difficult juncture” and it’s the “only euro area country that is experience a technical recession”. There was no improvement in the labor market and in the long term, Italy’s problem is well known and it’s “productivity growth”. But “I don’t believe that any of this has to do with the euro, otherwise it would be a general problem across the euro area.”

In CBS’s 60 Minutes show, Fed Chair Jerome Powell reiterated that current interest rates are “appropriate” while inflation is “muted”. He