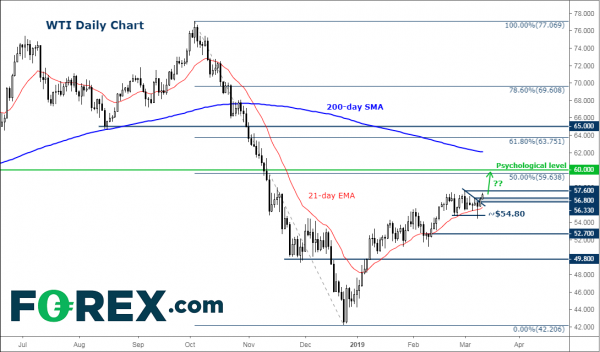 The price of crude oil continues to find support from growing expectations that the ongoing productions cuts from the OPEC and some allies outside of the cartel are helping to rebalance the market. The ongoing situation in Venezuela is providing additional tailwind support. Consequently, oil market participants are paying less attention to rising US (shale) oil production and concerns over slower demand growth. With the US winning market share from the OPEC, the cartel’s influence on prices will likely diminish further in the long term. These concerns may come back to haunt the markets at some later point in time, but right now the focus is elsewhere.

As a result of the above fundamental drivers, the buyers on WTI continue to step in and provide support after every small dip in prices. That’s why, for example, the faster-moving 21-day exponential average has been continually defended ever since prices broke above it in early January. The slope of this moving average is now positive, objectively telling us that the short term trend is indeed bullish. So, unless oil prices now create a distinct reversal, we could see a new higher high on WTI form, possibly as soon as this week.

Here are some of the key short-term potential support levels/bearish objectives:

So, due to the above technical and fundamental reasons, the path of least resistance appears to be to the upside for oil prices as things stand. We therefore expect to see higher prices in the short term, but are unsure about the longer term outlook given the above risks.