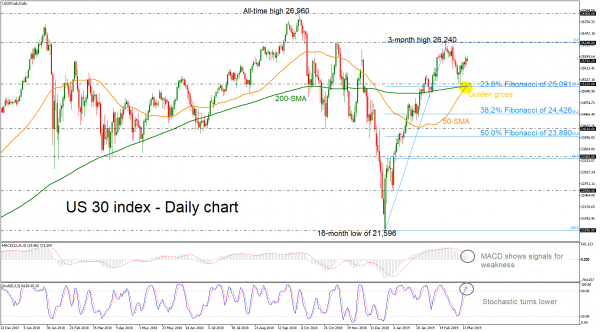 The US 30 index recorded a bullish signal in the previous week, completing a golden cross within the 50- and the 200-simple moving averages (SMAs) in the daily timeframe. Today, though, the index is on the backfoot and the technical indicators suggest that the market could ease a little bit in the short-term. The stochastic oscillator is ready for a bearish cross in the overbought zone, while the MACD remains below trigger line.

On the other hand, if the bulls continue to have the control, immediate resistance could come around the three-month high of 26,240, where it topped on February 25. If buyers pierce above that, the next obstacle may be the all-time high of 26,960.

In the short-term, the indicators point to a possible bearish retracement, however, the index is still creating higher highs and higher lows over the last couple of months, which augurs well for the medium-term.