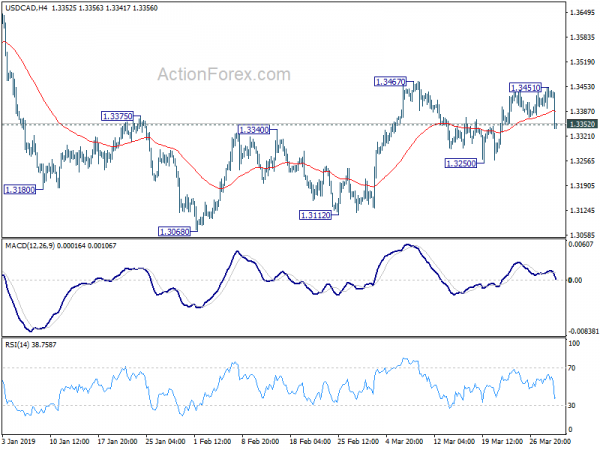 Canadian Dollar jumps sharply in early US session after stronger than expected GDP data. At least, the three month-rolling average remained in expansion despite the contraction in December and November. Additionally, WTI crude oil surged through recent resistance to resume larger up trend to as high as 60.72. For now, New Zealand Dollar is the second strongest for today, paring some of this week’s steep losses.

Sterling is the third strongest after rebounding just ahead of near term support against Dollar and Yen. There is clearly no following through buying in the Pound as focus remains on the Brexit Withdrawal Agreement (WA) vote. It’s confirmed by EU that, approving the WA is enough for pushing Article 50 extension from April 12 to May 22. Still, it’s unsure whether there is enough votes, in particular without Northern DUP’s support. Also, only 23 Conservatives who voted against the Brexit deal confirmed they will support now, including Dominic Raab, Jacob Rees-Mogg and Boris Johnson.

Staying in the currency markets, Yen is the weakest one for today, as global stocks strengthen. Also, US 10-year yield is back up 2.4 handle at 2.42 as it enters into consolidation mode. Dollar follows as second weakest after larger than expected moderation in core PCE inflation. US Treasury Secretary Steven Mnuchin tweeted that this round of trade talks in Beijing has concluded. He described the talks as “constructive”. And he looks forward to meeting Chinese Vice Premier Liu He in Washington next week to continue the “important” discussions.

US personal income rose 0.2% in February, below expectation of 0.3%. It “primarily reflected increases in wages and salaries, government social benefits to persons, and proprietors’ income ”