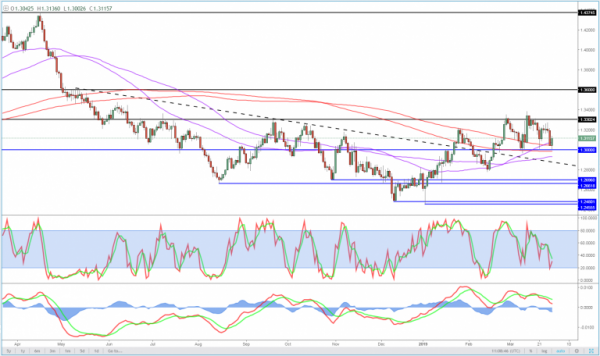 The pound is looking a little soft after another chaotic week in Parliament, one in which MPs decisively took back control before indecisively failing to agree on an alternative. Theresa May finally won the backing of numerous hard-line Brexiteers – although her deal being better than no Brexit is hardly a ringing endorsement – before one almost immediately claimed her deal is dead. And the speaker attempted to thwart attempts for a third vote on her deal before agreeing that half of the deal is different enough, unfortunately though that’s the half that has drawn the most criticism and may well be rejected today. Chaos.

It may be surprising therefore to see that the pound has turned south this week but hasn’t broken any major levels, just moved back to the lower end of its recent range, so traders aren’t too gloomy. The reason for this is simple, no-deal remains possible but unlikely. The realistic worst case scenario right now is a long extension and that has its positives and negatives, from a sterling perspective. On the one hand, it’s another prolonged period of economic uncertainty but one after which we could end up with a softer Brexit than that on offer, or none at all.

It’s been a good couple of days for the dollar, albeit ones that probably owe more to other currencies being weak than the dollar necessarily being strong. Still, it goes to show that once again, the dollar remains a favourite among traders when times are tough, aided of course by the strong US economy and enviable – albeit slowing – growth.

Naturally, a stronger dollar isn’t ideal for gold which had seen something of a resurgence. It had already started to stumble, so it’s no surprise that this has further taken the shine off it. Near-term headwinds look likely to remain for the yellow metal which could see recent support around $1,280 come under pressure. Next support below here could be found around $1,260 but ultimately, the dollar – and therefore weakness elsewhere – will likely prove decisive on the downside potential here.

Inventory data this week has shown slightly higher builds than expected which may be holding oil back. US oil rig data today will be closely watched as ever, with the trend since November heading in the wrong direction, although with the country pumping at record levels, it’s clearly not having a negative impact yet. That can surely only last so long though if the trend continues.