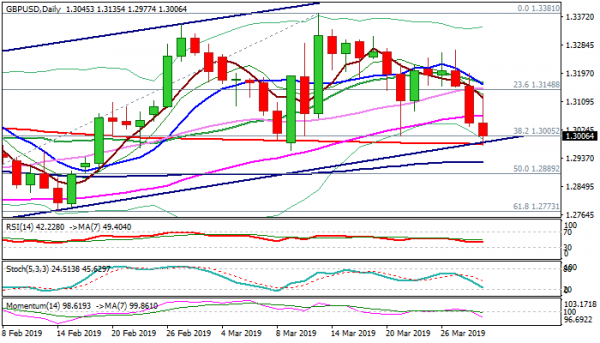 Cable collapsed below 1.30 on Friday and cracked key supports (200SMA/bull-channel support trendline and also pressured the top of thick daily cloud) after UK parliament rejected PM May’s deal for the third time. Lawmakers voted 344 against vs 286 for the deal, confirming their previous decisions that the plan is not good enough. Cable moved in a roller-coaster on Friday, as optimistic news boosted pound for over 100-pips advance, but rally quickly changed direction after initial optimism started to fade and accelerated to new low on May’s repeated defeat. According to the already known information, the Britain will leave the EU on 12 April, however, the government is expected work on alternative scenarios and possibly bring plan B that will need consensus at home and then to persuade EU members to approve longer extension. UK government will try to buy some time to find workable solution in order to avoid disastrous 12 April no-deal Brexit scenario. Today’s attack at 200SMA could generate strong bearish signal on weekly close below, as the moving average kept the downside protected since 19 Feb. Sterling could spiral lower on sustained break as this will also signal break out of bull-channel (uptrend from 2018 low at 1.2476) that would imply the change of the trend. Soured sentiment of Rejection of Brexit plan would add to negative outlook.