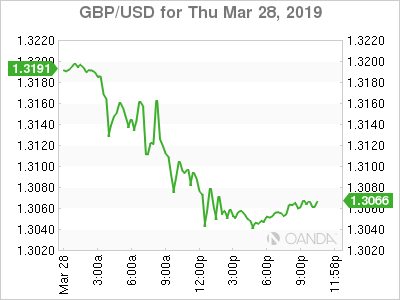 The British pound fell 1.05 percent on Thursday ahead of Friday’s vote on the Brexit agreement. The third time is not likely to be the charm for British PM Theresa May who has each time picked up marginal wins. She went all in this week declaring she would step down if her deal is approved in an effort to get political rivals to back the deal. It worked but given the size of earlier defeats it could be too little too late.

Failure for the third time could push the United Kingdom into a remain limbo, where a credible exit could not be engineered

The US dollar rose across the board versus major pairs on Thursday. Global growth concerns rose as central banks keep the dovish rhetoric on hand and recession indicators are making investors seek safe havens.

US GDP for the fourth quarter of 2018 was lower than expected at 2.2 percent. The U.S. Federal Reserve has taken off the table, via dot-plot, the possibility of a rate hike this year, but now probabilities of a rate cut are rising. The Fed was net dove at the end of the FOMC meeting with the only hawkish comments to praise the solid US economy. The data is not backing up that optimism which could mean a return to stimulus via lower rates.

Despite the downgrade US growth is head and shoulders above the other major economies which are struggling to gather momentum, but this poses another problem as the US dollar remains strong reducing American competitiveness when it is needed the most.

Stocks were higher on Thursday despite soft US fundamentals. Equities also managed to ignore Brexit anxiety as UK politicians are not ready to reach a consensus resulting in extending, and maybe dooming the Brexit process.

US-China headlines put a positive spin on negotiations and were the major force pushing stocks higher. Dovish Fed speakers continue to put the central bank in the sidelines for 2019 even as rate cut probabilities rise.