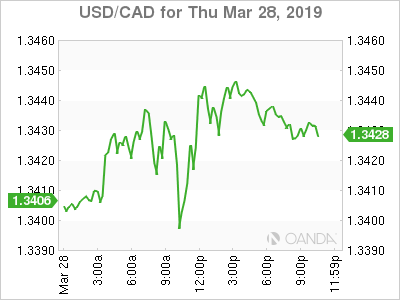 The Canadian dollar lost 0.25 percent on Thursday as the US dollar rose on safe haven flows boosting the greenback. Commodities offered no support for the loonie with gold and oil under pressure from the advance of the US dollar as investors liquidated assets and repatriated funds in the American currency.

US GDP for the fourth quarter of 2018 was lower than expected and strengthened the narrative of slowing down global growth. Canadian GDP will be posted on Friday with a small rebound of 0.1 percent of monthly data expected.

The Bank of Canada (BoC) joined the choir of dovish central banks with no hikes expected this year and the rising probability of a cut if economic indicators don’t improve. Recession alarms have gone off, but for now it would be early as confirmation is lacking as positive signs remains such as employment.

Oil had a volatile session on Thursday as supply concerns were put on the back seat as US President Donald Trump took to twitter to put pressure on the OPEC to pump more crude. The OPEC+ agreement to limit production has been the major factor behind price stability considering rising US output. This is not the first time Trump uses social media to ask oil producers to lower the price of oil by introducing more supply into the market.

WTI flirted with the $60 price level but did not make a compelling case to breakthrough and is now back at around $59.15. The rise of the US dollar as macro headwinds pick up force after Brexit and trade negotiations between the US and China keep investors on alert. The weaker than expected US Q4 GDP sent a negative energy demand signal as global growth concerns rise as recession indicators keep flashing red.

Higher inventories this week piled on pressure on crude, even as the situation in Venezuela could spin out of control as blackouts and political pressure from the opposition could be the undoing of President Nicolas Maduro.

The threat of less waivers for Iranian crude purchases and longer sanctions against Venezuela will keep pushing prices higher alongside the efforts of the OPEC+ to keep soaking up excess supply with their agreement.

Gold dropped more than 1 percent on Thursday as the US sucked the air out of the market putting pressure on the yellow metal. With the US-China trade negotiations ongoing and Brexit outcomes losing clarity by the minute the greenback was higher as investors preferred it as a safe haven above gold.

It is too early to count gold out for the week, given the British parliament could vote for the third time for Theresa May’s proposal on Friday. The British PM’s option remains the only one firmly on the table after MPs failed to reach consensus on a plan B as the factions remain too far apart to compromise.

May’s proposal despite being more tangible option, it is likely to fail, and with it Brexit itself as it opens the door for remaining if the Conservative government cannot deliver on the drawn-out process.