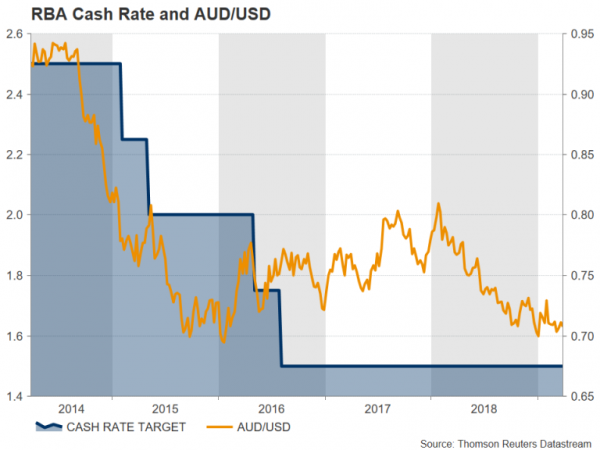 Bond markets will remain on edge in the coming week as the Reserve Bank of Australia could become the next central bank to switch to a dovish stance and possibly amplify the flight to safety, which has sent sovereign bond yields plummeting. Another catalyst for market volatility could come from the US jobs report, which has the capacity to either reverse or extend the rally in bond prices. There will be no shortage of US data with plenty of other key releases on the agenda, while Brexit headlines won’t be going away anytime soon as more votes are planned in the British Parliament.

After the Reserve Bank of New Zealand this week signalled a rate cut could be on the cards, its Australian counterpart will be under pressure to indicate a similar shift at its policy meeting on Tuesday. However, having dropped its tightening bias only in February, it may be too soon for the RBA to take another big leap, especially as it’s clinging on to hopes that a strong labour market will steer the economy out of the soft patch.

If the RBA does not adjust its policy stance, the Australian dollar is vulnerable to upside moves following this week’s losses when it fell in sympathy with the kiwi. But the aussie could suffer even sharper declines if the central bank does not turn more dovish.

But ahead of the RBA meeting, Chinese manufacturing PMIs could set the tone for the aussie. China’s official manufacturing PMI is due on Sunday with the Caixin/Markit manufacturing PMI following on Monday. Both indices are forecast to stay in contractionary territory below 50 for another month but, at the same time, expected to either edge up or hold steady, suggesting the slowdown could be bottoming out.

Domestic data releases will also be on the radar for aussie traders, which will include the AIG manufacturing and the NAB business conditions gauges for March on Monday, February building approvals on Tuesday and trade numbers on Wednesday.

Another central bank that’s been reluctantly forced to reconsider its policy path is the Bank of Japan. After making several tweaks to their experimental policy of “Quantitative and Qualitative Monetary Easing with Yield Curve Control”, which set the ground for an eventual winding down of the programme, BoJ board members are once again debating whether to easy policy further given the worsening economic environment globally and in Japan.

The BoJ’s own survey – the Tankan – should provide policymakers and investors some clues as to how businesses performed in the first quarter and their outlook for the upcoming quarter. The report out on Monday is forecast to show confidence falling across all sectors of the economy in Q1. But for the second quarter, although manufacturers are expected to become more pessimistic, non-manufacturers will likely signal sentiment holding steady. A bigger worry, though, could be their capital spending plans. Both big and small firms are forecast to report a drop in capital expenditure in Q2, which would point to slower GDP growth.

The yen could see some downside pressure if the Tankan survey disappoints. Other data to be watched out of Japan next week will be February household spending and wage growth numbers on Friday.

The euro whipsawed last week, initially rallying from the dovish Fed meeting but later plunging on the back of poor Eurozone PMI figures. There was more euro selling this week after ECB chief, Mario Draghi, hinted at further delays to a rate hike, and the negative pressure will likely continue next week as the European Central Bank publishes its account of the March policy meeting on Thursday.

While no surprises are anticipated from the March minutes when the ECB pushed back its rate hike timeline and announced a fresh round of cheap loans for banks, it will probably highlight the downside risks for euro area growth and inflation. Eurozone data is not expected to do the single currency any favours either.

The flash inflation reading for March, due on Monday, is forecast to show both the headline and core CPI rates holding steady at 1.5% and 1.2% year-on-year, respectively. Investors will also be watching German industrial orders (Thursday) and industrial output (Friday), hoping to see some signs of an end to the manufacturing slump that’s inflicted the Eurozone’s largest economy.

The UK economic calendar will be relatively light next week, with the Markit/CIPS PMIs being the only notable releases. The PMIs for manufacturing, construction and services are out on Monday, Tuesday and Wednesday, respectiv