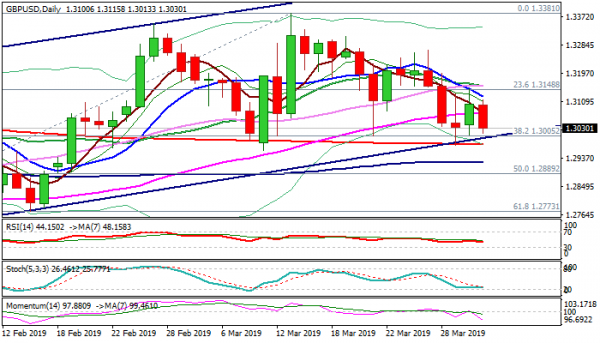 Sterling remains firmly in red ahead of start of the US session on Tuesday and extends weakness closer to psychological/trendline/Fibo supports at 1.30 zone. Rising fears of no deal Brexit continue to weigh on the pound, after PM May’s divorce plan has been rejected three times. May failed to find support to her plan or any alternative that increases risk of disastrous scenario of Britain’s exit from the EU without agreement on 12 Apr. If she doesn’t ratify her deal in the parliament by then or fails to make a deal for further Brexit delay, the no-deal scenario would become reality. Also, weaker than expected UK Construction PMI (Mar 49.7 vs 49.8 f/c) which stays below 50 threshold for the second straight month, adds to negative signals. Cable maintains strong bearish momentum that could help to eventually break key supports at 1.3005/1.2978 (trendline/200SMA) and extend weakness from 2019 high at 1.3381 (13 Mar). Holding below broken 55SMA (1.3077) will keep bears fully in play for final push through 200SMA pivot.