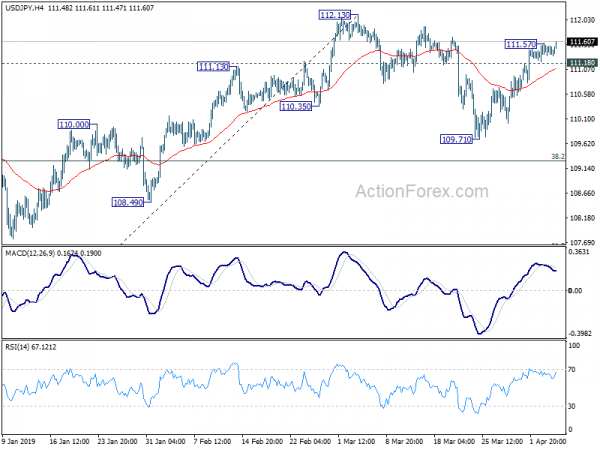 Dollar rises broadly in early US session as partly helped by pleasant surprise in initial jobless claims, which fell to lowest since 1969. But gains are so far limited as markets are awaiting meeting between Trump and Chinese Vice Premier Liu He at 2030 GMT. It’s widely reported that solid progress were made in the US-China trade negotiations since the meeting in Beijing last week. And Trump could be ready to finally announce a summit with Chines President Xi Jinping to sign a deal. But still, nothing is done until it’s done. Also, the non-farm payroll report tomorrow will carry much more significance than today’s jobless claims figure.

Meanwhile, news out of Europe are generally negative. Germany factory orders contracted sharply by -4.2% mom in March. Germany’s leading economic institutes lowered economic growth forecasts for the country in 2019 sharply to 0.8%, down from 1.9%. Italy is said to revise down growth forecasts to as low as 0.1% in 2019, thus raising budget deficit target to 2.3-2.4%. ECB accounts revealed that some policymakers considered pushing timing of first hike to after Q1 2020. There is no special progress in Brexit in UK even though April 12 cliff edge is approaching. Nevertheless, Euro isn’t too weak at all.

Technically, Dollar pairs are back into focus today. EUR/USD might have a take on 1.1176 key support. Decisive break there will resume larger down trend from 1.2555. USD/JPY is eying 111.57 temporary top and break will bring a test on 112.31 near term resistance. Sterling continues the pattern of rising in Asian session and weakening into US session. GBP/USD, GBP/JPY and EUR/GBP are still range bound with no sign of breakout.

US initial jobless claims dropped to 202k, lowest since 1969

Trump attacks Fed again, but anyone cares to listen?

Trump attacks Fed again by describing Fed’s actions as “unnecessary and destructive” in his tweet. But he also said despite that the economy is looking very strong, with China and USMCA deals “moving along nicely”.

Yesterday, Minneapolis Federal Reserve Bank President Neel Kashkari said in a town hall in Fargo, North Dakota that “Presidents are free to say what they want”. However, he added, “I can tell you with great confidence that my colleagues and I don’t pay any attention.”

The monetary policy meeting accounts of March ECB meeting revealed debates regarding the extent of the extension in the calendar based leg of the forward guidance. Back then, ECB said interest rates will be kept at current level at least through the “end of 2019”, changed from “summer of 2019”.

A numbers of members voiced an initial preference for extending the forward guidance through the “end of the first quarter of 2020”. That would be “more in line with the markets’ pricing of a first interest rate increase”. But others argued that “until the end of 2019” was “more consistent with the baseline scenario underlying the projections that foresaw a rebound of the economy in the second half of 2019”. Also, “in view of the high prevailing uncertainty, a data-driven gradualist approach was seen as most appropriate”

On the economy, the baseline scenario was a more protracted “soft patch” followed by a return to more solid growth. However, “uncertainty remained elevated” and it was “unclear how persistent the current soft patch would turn out to be.” Also “downside risks to the growth outlook continued to prevail despite” despite downward revision in growth forecasts in March.

And, it was highlighted that “growth projections had been revised down in a number of consecutive projection exercises and that growth might not be mean-reverting, as typically assumed in projections.” Uncertainty might also turn out to be “more persistent than expected”. Risks surround Eurozone growth outlook were “on account of the persistence of uncertainties related to geopolitical factors, the threat of protectionism and vulnerabilities in emerging markets.”

Though, it’s also emphasized that “while the growth momentum was weaker, it remained positive”. And, neither ” the euro area, nor the global economy, was currently in recession and the probability of a recession remained relatively low.”

Gemeinschaftsdiagnose slashes 2019 Germany growth forecasts to 0.8%, long-term upswing has come to an end

In the press release, Oliver Holtemöller, head of the Department of Macroeconomics and Vice President of the Halle Institute for Economic Research (IWH) said that “the long-term upswing of the German economy has come to an end.” Though, he noted that “we still consider the chance of a pronounced recession to be slight.”

The statement also noted that “political risks have further clouded the global economic environment.” Also, “if a no-deal Brexit occurs, economic growth this year and the next is likely to be significantly lower than indicated in this forecast.”

It’s widely reported today that Italy is going to cut 2019 growth forecast within this month. The government previously projected 1% growth this year and agreed to 2.04% budget deficit to GDP with EU.

Reuters said Italy will lower GDP growth forecast to just 0.3-0.4%. Bloomberg went further and said it could be revised down to just 0.1%. The budget deficit target, could then be raised up to 2.3-2.4% of GDP.

The final numbers will be approved by the Cabinet next week. But based on current situation, another clash with EU seems inevitable.

European Commission Vice President Jyrki Katainen warned that “hard Brexit is increasingly possible because we don’t know what the alternative is”.

He also complained that “You only know what Britain doesn’t want, but you don’t know what Britain wants and, taking into account the limited number of days we have available, it is logical to think we are rushing toward a hard Brexit. But hopefully I am wrong.”