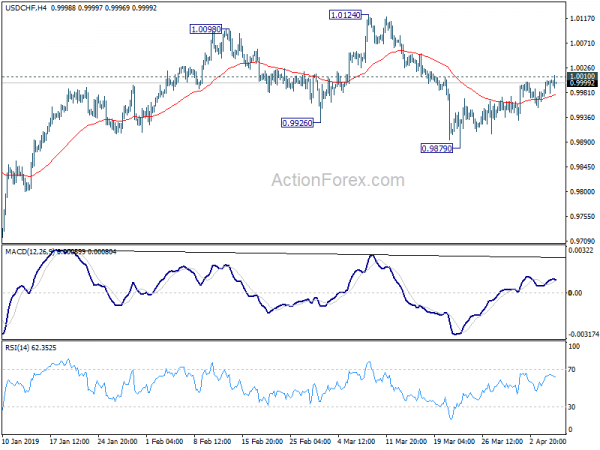 Dollar is lifted mildly in early US session as employment data posted slight upside surprise. But buying in the greenback is not broad based yet. A key factoring limiting Dollar’ rise is sluggish wage growth. But after all, the set of numbers look way better than February’s. Meanwhile, Canadian Dollar is broadly pressured after poor job data. There is prospect of more downside in the Loonie before weekly close.

Elsewhere in the markets, stocks are generally higher globally, but there is no committed buying. No Trump-Xi summit was announced yesterday but just positive words that progress was made. Trump said “we’re getting very close to making a deal”, “within the next four weeks or maybe less, maybe more”. This is rather empty. UK Prime Minister Theresa May formally seeks Article 50 extensions till June 30. But EU will only provide an answer next week.

UK Prime Minister Theresa May wrote a formal letter to European Council President Donald Tusk, requesting Article 50 extension till June 20. May said that she’s already started talks with opposition leader to agree on a proposal for the Commons that allow an order Brexit. Invitation for discussion was also extended more broadly to other MPs to achieve a consensus. If no single unified approach is achieved, May’s Government pledges to look to establish a small number of clear options on future relationship to be put the the House.

May said the steps “demonstrate that the Government is determined to bring this process to a resolution quickly”. And, “the government will want to agree a timetable for ratification that allows the United Kingdom to withdraw from the European Union before 23 May 2019 and therefore cancel the European Parliament elections, but will continue to make responsible preparations to hold the elections should this not prove possible”.

While May is seeking Brexit extension till June 30, it’s reported that Tusk is considering “flextension” instead. An unnamed EU official was quoted saying “the only reasonable way out would be a long but flexible extension. I would call it a ‘flextension’.” That is, “we could give the UK a year-long extension, automatically terminated once the Withdrawal Agreement has been accepted and ratified by the House of Commons”.

One clear advantage is that even if the Commons cannot approve the WA, “UK would still have enough time to rethink its Brexit strategy. A short extension if possible, and a long one if necessary. It seems to be a good scenario for both sides, as it gives the UK all the necessary flexibility, while avoiding the need to meet every few weeks to further discuss Brexit extensions”.

In the bigger picture, focus is back on medium term trend line (now at 0.9849). Decisive break there will argue that whole rise from 0.9186 has completed. Further break of 0.9716 will confirm reversal and target next support level at 0.9541. Nevertheless, there is still a chance that price action from 1.0128 are forming a consolidative pattern with fall from 1.0124 as third leg. If this is the case, stronger support should be seen between 0.9716 and the trend line to contain downside.