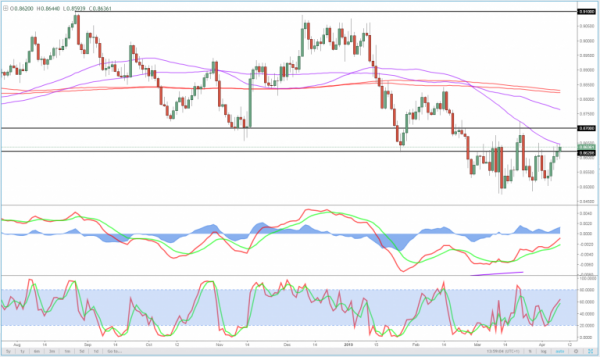 Biggest week yet for Brexit, until the next one

Brexit drama may be ramping up and desperation kicking in, but traders remain in quite a relaxed mood as we navigate through another hugely important week in the process.

May has gone on the charm offensive to Germany and France today as she attempts to win around the EU’s two most important leaders to her extension plan, leaving her willing deputies at home to continue negotiations with the Labour Party which forms the basis of the PMs justification.


The cynic in me continues to think that the talks between May’s team and Labour is just for the cameras, with both sides keen to be seen doing everything to avoid no deal Brexit and deliver on the referendum result, while convincing the EU to agree to only a short extension.

Scaring hard-line Brexiteers that are yet to back the PM into falling into line could be the cherry on top of the cake, although this could still not be enough. An extension is inevitable though, it’s just a question of how long the EU will give May to get Parliament’s backing.

As mentioned earlier, traders seem very chilled about the whole situation, despite being only three days from no-deal. Of course, this is highly likely to be avoided but it remains the default until an extension is agreed.

EURGBP remains at the upper end of the range it’s traded within for the last month or so, a sign that nerves aren’t entirely absent from the process. There’s no evidence that no deal is in any way priced in though – which is understandable given the UK Parliament’s strong opposition to it – but that means there is potential for a severe shock to the upside.

It’s interesting that on the last couple of occasions when sterling has rallied, we’ve failed to make new lows in the pair which could suggest it’s a little oversold. Perhaps even an extension won’t be enough to get a positive response in sterling, given that this looks quite priced in. Profit taking on an extension wouldn’t be a huge surprised given the confidence sterling bulls have displayed recently, although the terms of it may determine the response.

A break above the 200/233 simple moving moving average on the 4-hour chart below may be indicative of traders becoming more bullish ahead of the deadline. We did break above here a few weeks ago, which turned out to be a false breakout, but for most of the year so far – since breaking below early January – it’s been reliable resistance. A clean break this time with some confirmation could therefore be a good bullish signal. A break and close above 0.87 would provide a further strong bullish signal.