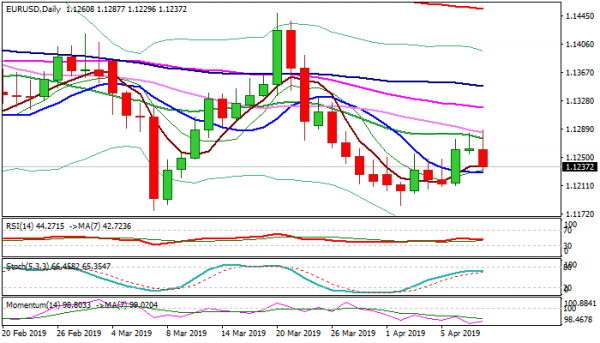 The Euro fell over 50 pips after data on Wednesday, pressured by stronger dollar and soft tone from ECB President Draghi in the press conference that followed policy meeting.

The European Central Bank left interest rates unchanged, as widely expected, also Draghi’s rhetoric showed no significant changes from the previous meeting, as he pointed on persisting downside risk on slower economic growth and signaled likely no rate hikes this year on muted inflation, which may increase over medium term.
The sentiment softened, sending the Euro down to important 10SMA support at 1.1229.

Weaker than expected US inflation figures in March (Core CPI y/y 2.0% vs 2.1% f/c and m/m 0.1% vs 0.2% f/c) revive idea for US rate cuts and boost risk appetite that lifted dollar as the most liquid currency.

Close below 10SMA is needed to signal an end of corrective phase and open way for retest of key short-term supports at 1.1186/76 (Fibo 61.8% of 1.0340/1.2555/2019 low), violation of which would signal continuation of larger downtrend. Only sustained break above 1.1280 zone would sideline growing downside risk.