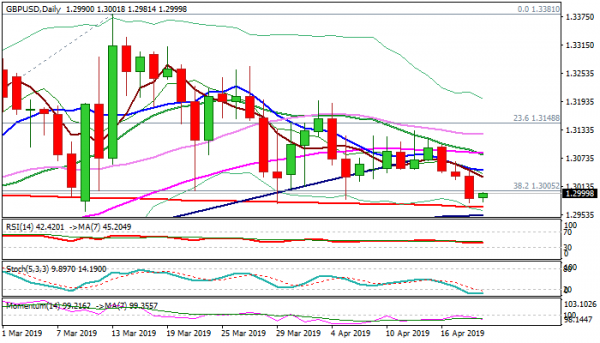 Cable consolidates within narrow range above three-week low at 1.2978 in holiday-thinned Friday’s trading. The pair fell on Thursday, dragged by fresh weakness of Euro on weak EU PMI data, with little help seen from upbeat UK retail sales readings. Bears managed to close below psychological/double-Fibo 1.30 support (Fibo 38.2% of larger 1.2397/1.3381 ascend/Fibo 61.8% of 1.2772/1.3381 upleg) and came close to key 200SMA support at 1.2969. Techs are expected to be the main driver today on absence of economic indicators, with lower volumes keeping the price action more vulnerable of sudden moves. Daily momentum heads south and made bear-cross with its 7-d SMA, supporting negative scenario, however, slow stochastic bottomed in deep oversold territory, suggesting that bears may take a breather before fresh attack at 200SMA. Eventual break below 200SMA, which kept the downside protected in past two months, will generate very strong bearish signal. Falling 10SMA (1.3049) is expected to ideally limit corrective upticks and keep intact upper trigger at 1.3085 (converged 20/55SMA’s).