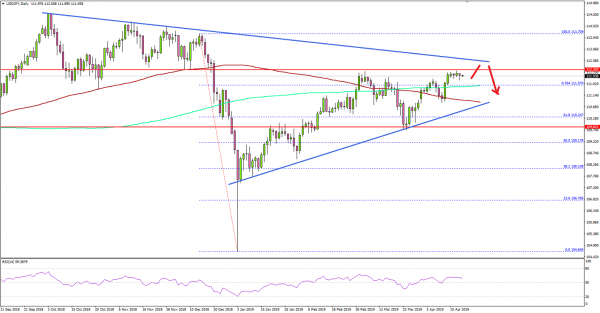 The US Dollar started a strong upward move from the 109.80 support area against the Japanese Yen. The USD/JPY broke the 110.60 and 111.50 resistances to move into a positive zone.

Looking at the daily chart, the pair followed a solid bullish path from the 109.70 swing low and traded above the key 110.60 resistance plus the 100-day simple moving average (red).

If there is a clear break above the 112.50 resistance and the trend line, there could be further upsides above 113.00 and 113.50. On the flip side, a failure to clear the trend line could trigger a downside correction towards the 110.60 support and the 100-day SMA.

Fundamentally, the US Retail Sales report for March 2019 was released by the US Census Bureau. The market was looking for an increase of 0.9% in sales in March 2019, compared with the previous month.

The actual result was better than the forecast, as there was a 1.6% rise in sales, which was a lot better compared to the last decline of 0.2%. Looking at the Retail Sales ex Autos, there was an increase of 1.2%, more than the 0.7% forecast.

Overall, the USD/JPY could make an attempt to surpass the 112.50 and 112.60 resistance levels, but it won’t be easy for the bulls to gain strength above the trend line.