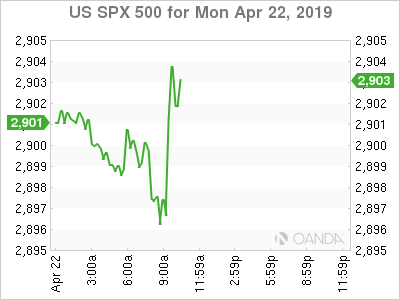 The Easter holiday weekend continues in Europe, but it is anything but calm.  It is all about oil this morning.  Roughly an hour before the US open, Secretary of State Pompeo confirmed reports that President Trump will no longer grant exemptions on waivers for Iran oil sanctions.  The news was speculated on Sunday, but still comes as surprise to China, India, and Turkey, all who were expecting the waivers that expire on May 2nd to be extended.

This is a big week for earnings results as 150 of the 500 stocks in the S&P 500 report.  Oil services giant, Halliburton delivered a penny beat on their EPS at $0.23, while revenue came in at $5.74 billion, above the highest range of estimates.  They said, “We believe the worst in the pricing deterioration is now behind us. For the next couple of quarters, I see demand for our services progressing modestly.”


Stocks are slightly lower on the day and will likely see price moves pick up when Europe returns and once the bulk of earnings results come in.

President Trump’s decision to end waivers on Iranian oil basically ends the OPEC + production cuts agreement.  The lack of waivers will require other OPEC members to make up for the loss oil and that will make it difficult to have all members agree upon on a new strategy.  Initially, the Saudis and UAE are expected to make up for the downfall.

Iran is also threatening to close the strait of Hormuz, which handles roughly 40% of oil goes through it.  This may be more tough talk, but it is unclear how and if Iran will try to move forward on this.  If this because a reality, insurance costs will likely rise and we could see this be passed on to the consumer.

Gold prices fluttered higher but was unable to gain any real traction following the Iranian sanctions developments.  The precious metal remains near the lows of the year and will likely take a queue from this week’s big earnings results.  The yellow metals gains are likely to be hampered by trade deal optimism between China and the US.

The dollar is mixed against its major trading partners as thin conditions persist for currencies.  The dollar did fall to the loonie following the strong move in oil prices, but the gains have so far been capped at 0.2%.

The greenback also posted limited reaction to a disappointing round of housing data.  Existing home sales declined and missed estimates for the month of March.  Sales have now fallen for the fourth time in five months, despite a wrath of economic indicators that would otherwise support a rebound.  Continuing weakening data will be disconcerting if we continue to see Mortgage rates fall lower, wages remain strong and the if the overall US economy remains on sound footing.