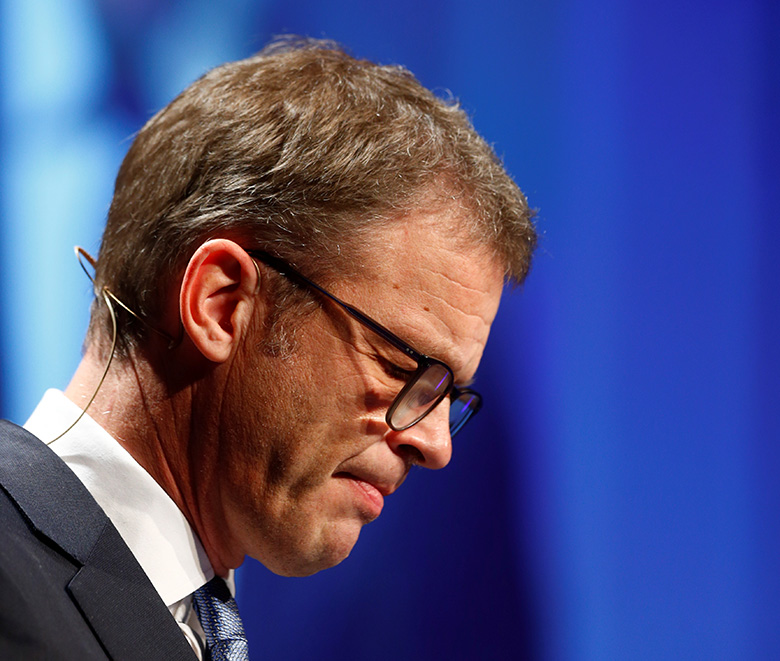 The day after ending merger talks with Commerzbank, Christian Sewing, chief executive of Deutsche Bank, put on his bravest face to announce a 9% decline in revenues during the first quarter of 2019 compared with the same period last year.

Sewing says that the bank made three promises to shareholders in 2018 and has delivered on all of them: to lower costs, to manage its balance sheet conservatively and to make good progress improving its controls.

“We have begun to pivot towards controlled growth,” he says.

It is a sign of just how low expectations have been set for this bank that senior management should even attempt to spin a quarter in which it just about met them as a vindication.

Their job is to manage the balance sheet conservatively. With CDS spreads now back up to 170 basis points, Deutsche’s higher funding costs are a competitive disadvantage to US and European peers in pricing new business. It claims to have seen some modest market share gains recently, but these come in shrinking revenue pools.

Taken together, revenues across equities and FIC sales and trading and origination and advisory ­– in other words, classically defined investment banking – fell 16% in what Sewing described as a “very, very difficult and challenging first quarter”.

In the less market-sensitive businesses ­­– private and commercial banking, global transaction banking and asset management ­– revenues picked up by 1%.

However, the interest-rate outlook in Europe is disheartening, credit costs may rise and the bank has to manage hits to its CET1 ratio likely to come from recent asset-quality reviews and also do something about a leverage ratio now back down to 3.9%.

As the head of the leading bank in Europe’s largest economy, Sewing had a duty seriously to consider the possibility of merging with the number two bank, with a longer-term view on European scale consolidation eventually to come.

However, six weeks have been spent arriving at a conclusion that seemed obvious at the outset: that the potential gains after netting cost-savings against revenue dis-synergies did not come close to compensating for the high execution risk on such a deal.

Sewing is back where he was: claiming that the pre-existing muddle-through strategy is the best option for now, while also admitting that Deutsche will continue to consider alternatives without discussing what any of them might be.

“A merger would have bought Deutsche Bank time to reposition its global franchise,” says Dierk Brandenburg, head of the banks team at Scope Ratings. “Without that prospect, the pressure to act is increasing.”

Sewing says: “Our non-negotiable starting point is that Deutsche Bank will remain a global significant financial services firm – in the US and Asia as well as in our home market.”

Scope is not alone in now expecting accelerated cost-cutting and downsizing of the corporate and investment bank, which continues to consume an out-size proportion of group capital, especially in the US.

However, Scope also points out that cutting costs on a more accelerated schedule risks creating “terminal reductions in revenues”.

For this year, Deutsche had set itself a stepping stone target of a 4% post-tax return on tangible equity on the way to acceptable returns in the longer term. Analysts and investors seem to doubt it will achieve even this.

For the first quarter, it reported just 1.3%, although that is after accounting a full €600 million hit on the bank levy, which if it was spread evenly throughout the year would suggest an RoTE of 3.6% for the first quarter: hardly, as Scope points out, cause for euphoria.

In March, when it published its annual report, Deutsche had suggested revenues might rise modestly this year. Now, it says they will likely be flat on 2018. The only target it is nailing itself to is to cut costs to €21.8 billion for 2019.

Analysts take this as a given, but want to know how much more it might cut costs if revenues disappoint.

Decisive steps might be driven by another company-specific or industry-wide crisis, or investment banking revenues not stabilizing.