EURAUD Bears Retrace Down; Halt at the 61.8% Fibonacci Level

The gradual upward slope in the 200-day simple moving average (SMA) backs the positive sentiment in the medium-term. However, the flattened 50-day SMA and the completed downward reversal of the 21-day SMA, suggests a short-term pullback could be in the books. The MACD agrees with this view as the indicator loses positive momentum beneath its red trigger line. Also, the RSI has crossed below its 50 neutral mark and into the bearish territory.

In the medium-term picture, a drop under the 1.6100 handle would shift the outlook back to neutral, though only a close below the 1.6024 level would confirm the change. 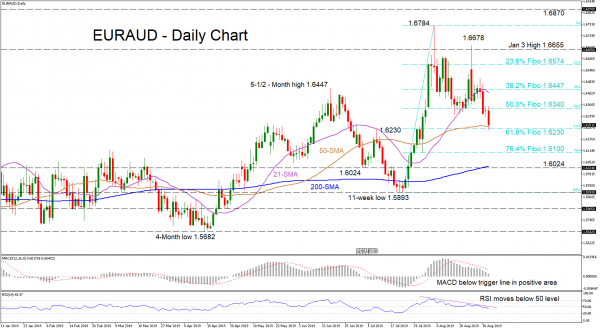