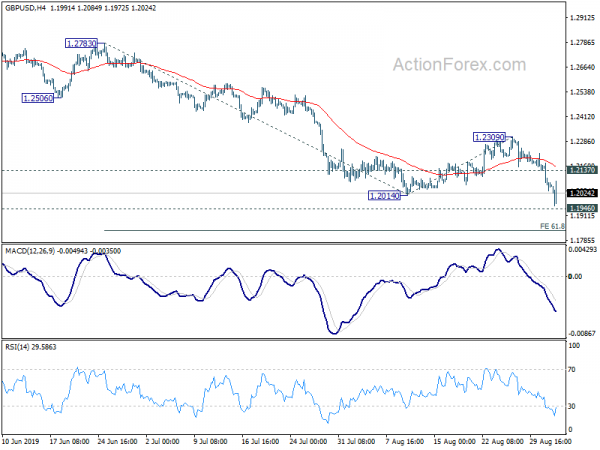 Sterling and UK treasury are the major focuses today as all eyes are on Brexit again. UK Prime Minister Boris Johnson has indicated that he will call an election on October if the MP’s bill to seize control of the Commons timetable to force Brexit delay is passed. The Pound initially dived as 10-year gilt yield hit record low at 0.341%. While Sterling then recovered, there is no sign of bottoming and further fall is expected. Though, staying in the currency markets, Canadian Dollar is the weakest one, followed by Sterling and then Euro. Australian Dollar is the strongest, followed by Yen and Swiss Franc.

Technically, GBP/USD is trying to draw support from 1.1946 (2016 low) but in any case, break of 1.2309 resistance is needed to confirm bottoming. Otherwise, further fall is still expected to 1.1834 near term projection level. GBP/JPY is now pressing 126.54 support and break will confirm down trend resumption for 122.75 (2016 low). Such development will further affirm underlying weakness in the Pound.

UK PMI Construction PMI dropped to 45.0 in August, down from 45.3 and missed expectation of 46.7. It’s the fourth consecutive month of sub-50 contractionary reading. Additionally, new orders fell as fastest pace for over 10 years since March 2009. Construction output dropped for the fourth month in a row. And business optimism sank to its lowest level since December 2008.

Tim Moore, Economics Associate Director at IHS Markit, said: “Domestic political uncertainty continued to hold back the UK construction sector in August, with survey respondents indicating that delays to spending decisions had contributed to the sharpest fall new work for over 10 years…

“Concerns about softening demand for new projects resulted in a fall in business optimism across the construction sector to its weakest since December 2008. This provides an early signal that UK construction companies are braced for a protracted slowdown as a lack of new work to replace completed contracts begins to bite over the next 12 months.”

Italy’s Five-Star Movement and Democratic Party have agreed to form new coalition. A 26-point program was published underpinning the government. And, supporters of Five-Star are now holding an online ballot for the proposed coalition.

Five-Star said that “this is a very delicate moment for the country. It must be tackled by focusing on the interests and needs of citizens, of the community that we all form together.”

One of the commitments of the program is to use the upcoming budget to boost the stalled without endangering public finance. Though, the coalition called for greater flexibility from EU regarding the “excessive rigidity” of existing budget rules.

RBA stands pat, Aussie pares losses as there is no further dovish turn

RBA left cash rate unchanged at 1.00% as widely expected. The central bank just noted that “it is reasonable to expect that an extended period of low interest rates will be required”. And the board will continue to “monitor developments, including in the labour market, and ease monetary policy further if needed”.

RBA expected growth to “strengthen gradually to be around trend over the next couple of years”. Main domestic uncertainty continues to be consumption outlook. However, wages growth remains “subdued” with “little upward pressure”. And the Australian economy can “sustain lower rates of unemployment and underemployment”. Inflation pressures also remain “subdued”. On the positive side, there are “further signs of a turnaround” in housing markets, especially in Sydney and Melbourne. Such stabilization is expected to support spending.

Released earlier, Australia retail sales dropped -0.1% mom in July, below expectation of 0.2% mom. Current account surplus widened to AUD 5.9B in Q2, above expectation of AUD 1.5B.

Intraday bias in GBP/USD remains on the downside for further decline. We’d remain cautious on bottoming at 1.1946 low. On the upside, above 1.2137 minor resistance will turn intraday bias neutral first. But break of 1.2309 resistance needed to confirm short term bottoming. Otherwise, outlook will remain bearish for further decline. On the downside, decisive break of 1.1946 will target 61.8% projection of 1.2783 to 1.2014 from 1.2309 at 1.1834.