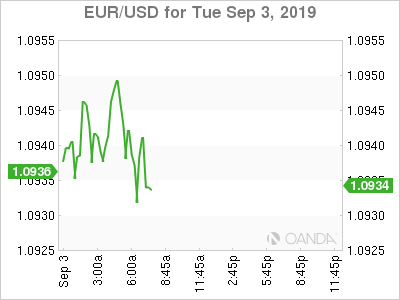 Traders returned from a three-day weekend with concerns that the risky economic profile of the global economy got worse as concerns grow that US-China trade war will not yield a September meeting. Over the weekend, the US rejected Beijing’s request to delay tariffs. Over the past couple weeks, momentum has swayed back and forth with whom had the advantage in the trade war, but if we continue to see economists cut their growth forecasts below 6%, China will not reach their goals for their centenary in 2021. With further economic possibility on the horizon, China will likely resort to drastic stimulus measures to support domestic consumption. If we do see China ease, it could occur as early as Friday after the Hong Kong close. While the developments over the weekend were far from constructive, expectations are leaning slightly towards to seeing some constructive progress between the world’s two largest economies at some point this month.

Brexit is the key story in the FX markets as the euro is starting to price in a Brexit disaster and as EUR/CHF seems ready to target the Brexit referendum low at around 1.06.

With 59 days till the October 31st deadline, no one can say for sure how Brexit will turn out, but this week’s events should start to provide some clarity. Brexit is likely to go to the courts as we could see Parliament pass legislation that prevents no-deal Brexit before we see an election triggered. If we see a general election, the no-deal risks will go up and we could see further pain for the British pound. The pound initially broke below the 1.20 level for the first since January 2017 after the prime minister raised the risk of calling an election to deliver Brexit.

Oil prices are falling down as demand concerns grow after Chinese and US officials so far are unable to agree on a date to meet, and as Hurricane Dorian’s path will not be a major factor in delaying production levels in the Gulf of Mexico. This is a critical month for the US-China trade war and if we don’t see a major step in the right direction, oil could easily break below the summer lows. Optimism still remains that both sides will continue to move talks in the right direction, but that sentiment is waning.

Two major petroleum stations in the Bahamas had plenty of time to shutdown and we should only see just over 30 million barrels of crude and condensate impacted. Crude will likely remain focused on the trade war and the continuing trend of falling US stockpiles.

Gold will likely remain strongly supported on Brexit angst and trade war uncertainty. Gold is higher on the day but still remains a couple percentage points away from last week’s high. The crowded trade is waiting to breakout higher again but we might not see that happen until we see a key breakdown in talks between US and Chinese officials.

Bitcoin is back up above the $10,000 level in what is likely a short squeeze move. Broader strength in the cryptocurrency space did not match Bitcoin’s rally, so we could see this rebound be temporarily.