WTI oil futures rallied from a seven-month low on August 7, but the gains were halted at 56.68 and around the 38.2% Fibonacci retracement level of the down wave from 66.57 to 50.58. After multiple failed attempts to close above the 56.68 resistance level over the last couple of weeks, the 20-, 50- and 200-day simple moving averages (SMAs) have converged, encapsulating the price of the commodity. More importantly, the bull’s endeavor, to move above the downward sloping 100-day SMA was denied, something also reflected in the momentum indicators.

The MACD’s and RSI’s increasing positive momentum dried up, leaving the indicators stuck in the neutral zone.

Summarizing, the short-term outlook remains bleak as oil is held between the 57.45 and 53.48 levels. The pair could follow a new direction above or below those boundaries. 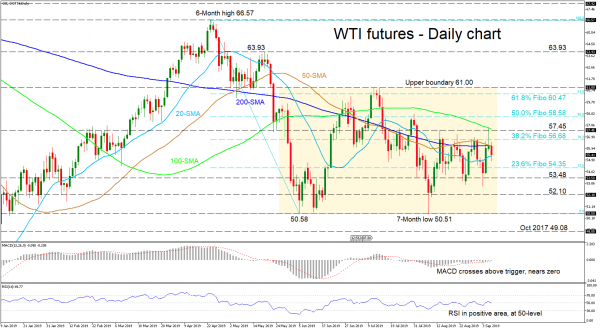