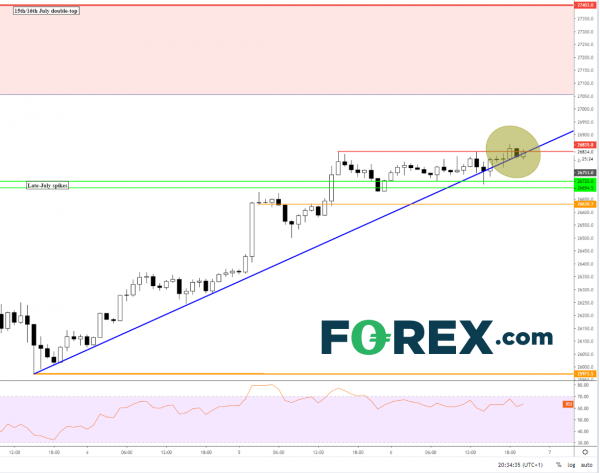 The market could use more momentum on approach to July highs

The Dow Jones Industrial Average continues to deepen its underperformance relative to the other U.S. blue-chip indices, even as Wall Street shares lose some of the optimistic momentum seen earlier in the week. A mixed set of employment data for August trimmed stock gains in the wake of falling anxieties across a range of geopolitical fronts. Markets don’t exactly look discouraged though, with indices retaining mild gains. Risk appetite is partly being helped by comments from Fed Chair Jerome Powell. There’s no question the 25-basis point cut markets have pencilled for next week is as good as certain.

The Dow’s lag goes back further. It is up a respectable 15% in 2019 but the Nasdaq 100 is around 9 percentage points higher and the S&P 500, which industrials tracked closely for most of the last five years, is also pulling away. The root of the tardiness isn’t straightforward. A mixture of DJ’s preponderance of so-called ‘old economy’ shares (even though it also contains some techy names) plus, anomalies from its price weighted model account for its tardiness.

The laggard theme helps set the bias for this market. DJIA has notably set new record peaks far later than U.S. peers. As such, the market’s technical case may not be as positive as for other top Wall Street gauges. The short-term view shows leeway for moderate further upside. There’s a lack of notable price action between current levels and nearby peaks around 27400 after decisive – i.e. rapid – rejections there that began in July and based last month.

A ‘double top’ around 27400 between 15th and 16th July should be the ultimate target for buyers. However it is protected by a region of consolidation evident throughout that month, with the low of the range witnessed around 27060, after strong defence there late that month.

The question now is whether DJIA will get there soon, given that it currently looks like it could lose track of the strongly bullish rising line originating at 3rd September’s lows. Should the trend line definitively break, the watch will be on for whether strong support candidates come into play.

Chiefly, these are the lower leg of a whipsaw on 31st July at 26720 combined with a similar up-spike days later at 26694. Some resistance was initially evident to that thin band on the way up. The idea is that the vein may support buying if approached from above. It’s also worth noting 26694’s significance from its proximity to a long-standing record peak. The Relative Strength Index reading in the chart below is neutral. As such, it’s really a case of waiting to see if support holds, before forming a definitive view. If not, 25970 lows, where this week’s advance began, are likely to become magnetic.