Markets On Tenterhooks Ahead Of Draghi’s Finale | EUR/CHF, EUR/AUD, EUR/NZD

For a full preview of what to expect from today’s ECB meeting, you can read yesterday’s ECB preview by my colleague Fiona Cincotta. Although the basic premise is for Euro to weaken if ECB underdeliver, or strengthen if they come up with the goods. With it being Draghi’s last meeting, he could opt to just cut rates and leave the door open for his successor, Christine Lagarde to take over. Unless of course he wants to go with a bang. Either way, the Euro will be the main currency for FX traders to monitor in the upcoming European session. 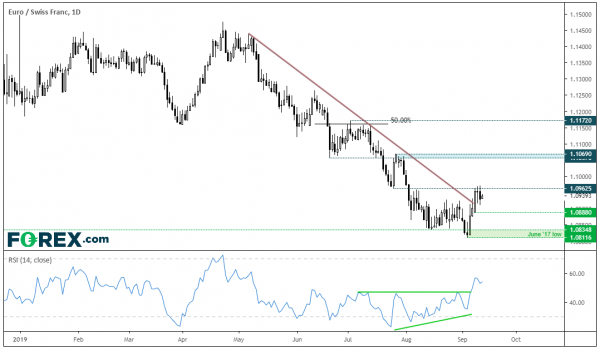 EUR/CHF remains supported after breaking its bearish trendline on Monday. That said, we’ve seen a Rikshaw Man doji to show a hesitancy to break higher, followed by a bearish outside day to warn of a correction. Yet whilst it remains above the 1.0882 low, we suspect a reversal is underway, given the bullish divergence ahead of the trendline break. 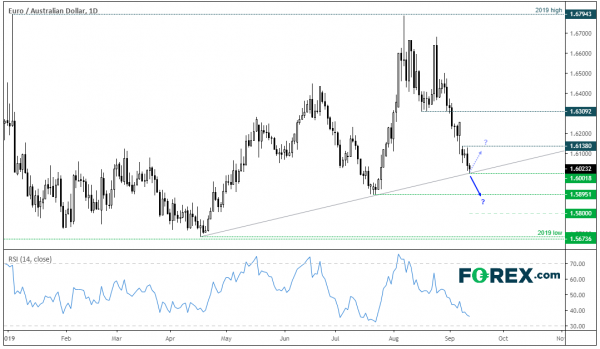 EUR/AUD is currently testing the bullish trendline from the April low, and currently forming a spinning top ahead of the ECB meeting (we doubt it will maintain this pattern to the close). As it’s testing its trendline, it could be argued the optimal trade were if the ECB is to disappoint and send EUR/AUD higher. 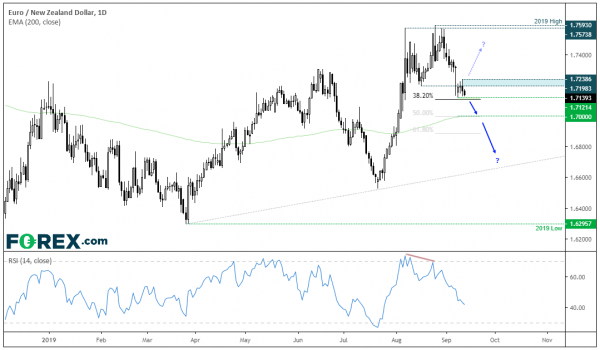 EUR/NZD almost looks like EUR/AUD did a few weeks back, only its yet to test its bullish trendline. Currently trading within a 120-pip range after falling from its 2019 highs, a bearish divergence formed with RSI before rolling over and prices are trading near the lows of the 1.7121-1.7240 range.