Australian Jobs Data Could Strengthen the Case for More Stimulus

Asian traders will see the release of the Australian monthly employment report on Thursday at 0130 GMT and expectations are for a gloomy set of figures that may likely raise the odds for another rate cut later in the year.

On Tuesday, the minutes of the Reserve Bank of Australia’s September policy meeting reminded markets that the door for further monetary easing remains open as policymakers closely monitor global and domestic economic conditions.

Having cut interest rates twice in the summer, the RBA decided to stand pat in September and give time for its recent actions to take effect. Disappointingly, though, economic numbers apart from the housing sector have yet to show any meaningful progress despite the government lowering income tax for the low- and middle-class consumers.

Particularly, consumer confidence tracked by the ANZ Roy Morgan weekly survey slumped to two-year lows in September, hinting that households are not planning to boost spending in the coming months. Separately, business confidence measured by the closely watched National Australia Bank business index reversed lower in August, while the business conditions index extended the decline from July, both remaining under their long-run averages. Following the results, the NAB increased its bets on rate cuts, predicting at least two additional rate reductions by February from one previously.

Turning to Thursday’s employment figures, the data will likely endorse the feeling of pessimism among companies as the number of new jobs created in the month of August is anticipated to have slowed to 10k from 41.1k in July, with the unemployment rate ticking up to a one-year high of 5.3% after remaining stable at 5.2% over the past three months. More worryingly is the fact that wages continued to flatline in the three months to June, recording an annual growth of 2.3% since Q3 2018 and under the more-than 3% policymakers desire to achieve. 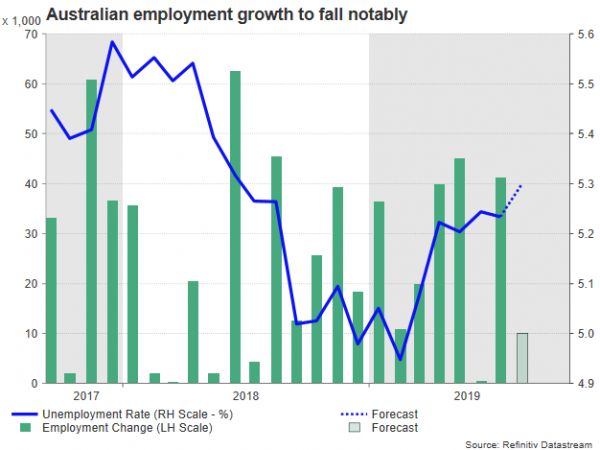 While stubbornly low wages have turned to be the new normal, economies across the globe are relying on the labor market to sustain consumption and therefore GDP growth at a healthy pace. However, with the US and China prolonging the trade war and the rest of the world feeling the pinch, companies have little incentive to engage in more hiring or/and increase paychecks, keeping at the same time the RBA behind its employment goals. Note that besides its 2.0% inflation target, the central bank also aims to achieve full-employment conditions with an unemployment rate of less than 4.5%, and see wage growth rebounding.

Although trade terms in the risk-sensitive Australian economy remain resilient to mounting global headwinds thanks to stimulus measures taken by key market players such as China, options continue to lean towards further monetary easing and the RBA will not hesitate to provide additional accommodation by the end of the year if the economy keeps decelerating in the third quarter.

The jobs data could add more pressure for lower interest rates if the outcome deviates significantly from forecasts, consequently leading the aussie closer to the 0.6820-0.6796 restrictive zone against the dollar. A bigger negative surprise could also see a retest of the 0.6745-0.6700 region.

On the other hand, better-than-expected figures could reduce the odds for a 25 bps rate cut which currently stand around 53% according to the Overnight Indexed Swaps and hence bode well for the aussie. In this case AUDUSD could rebound towards its recent peaks and the 0.6900 level, while higher resistance could next appear around 0.6940.