EURGBP Does Not Look Ready for a Meaningful Rally Yet 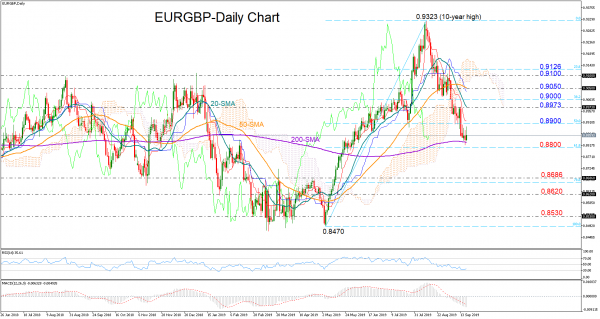 EURGBP seems to have reached oversold levels near the 200-day simple moving average (SMA) as the RSI is showing some positive movement after flatlining near its 30 oversold levels. The MACD and the red Tenkan-sen are also looking ready to change direction, though as long as the indicators hold in bearish territory, downside pressure is expected to dominate. Besides that, the bearish intersection of the 20- and 50-day SMAs should also keep traders cautious if the lines remain negatively aligned.

Meanwhile in the three-month picture, the stabilization in the 50-day SMA mirrors neutral conditions. Yet as long as the line holds above the 200-day SMA, the odds for a bullish outlook remain high.

In brief, EURGBP continues to lack clear bullish signals in the short-term as the momentum indicators keep fluctuating in bearish territory. In the medium-term, the pair is in a sideways move but hopes for an outlook reversal remain alive.